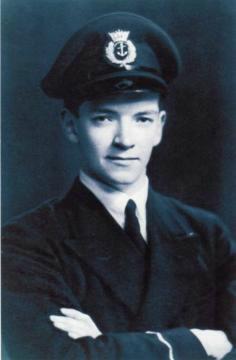 David joined the Merchant Navy and found himself aboard SS Dover Hill on its way to Russia as part of convoy JW53 (known as The Forgotten Convoy). Having discharged their cargo, they anchored in the Kola Inlet. On 4 April Action Stations sounded and two JU88 bombers attacked the ship. One bomb penetrated the steel deck but remained unexploded.

On being informed that there were no British Bomb Disposal experts in N.Russia, the crew realized it was down to them to deal with the situation for, as David says, “(she) was only an old battered Merchantman (but) she was still our home and no German was going to make us leave her while she was still afloat.” 19 crew members, including the Captain, formed a team of volunteers and began digging down into the coal bunkers.

Using a small hammer to free the extractor, which had stuck, he eventually removed the detonator and primer. “At each tap the hairs stood up on the back of my neck against the hood of my duffel coat.” The bomb was dumped overboard into the Kola Inlet, where it probably lies to this day. 5 men were awarded the OBE and 14, the King’s Commendation for brave conduct.