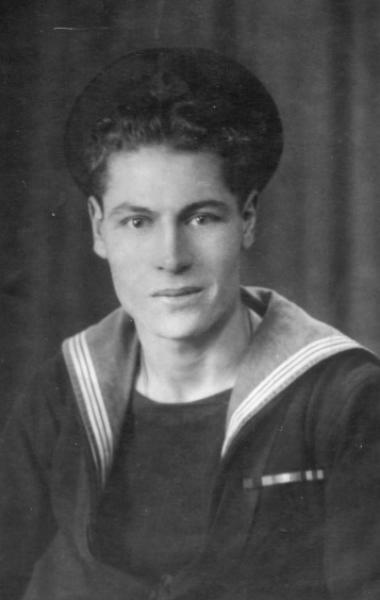 David Kennedy was born on 19 March 1926 and joined the navy at Devonport.

He served on HMS Domett K473 which was an American built Captain Class frigate on loan from the Americans. This ship formed part of the 3rd Escort Group and was sold for scrap in America in 1947.

One of his journeys was from Loch Ewe to Poliarnie Murmansk. I understand his ship was unable to dock and therefore moored along an adjoining river. They tied up and there was a field with some Russian children playing with a ball. Some of the shipmates joined in a game of football and soon became very warm due to the heavy clothes needed for crossing the Arctic. Dad says that German artillery fire could be heard from their position in the field.

On another occasion when Domett tied up, it did so alongside a Russian ship. Domett’s postman had to board the Russian ship in order to reach the shore and collect the post. He was invited below deck for a celebratory Vodka or two. Needless to say shipmates on HMS Domett never received their post that day.