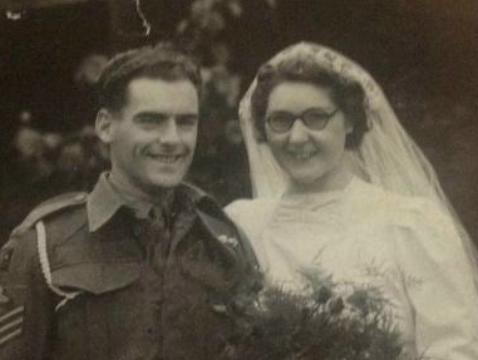 Douglas (known to friends and family as Duggie) was born on 4th July 1916 in Rattray, Blairgowrie, to a large family (4 brothers and a sister). His parents were tenant farmers. During his youth he was keen to be involved in as many local activities as his means would allow, and as a young man he was an enthusiastic member of a local dance band. I recall his stories about their many gigs at the Glen Ericht Hotel in Blairgowrie. His instrument of choice was the tenor saxophone, but as I can testify, he was also proficient on the violin and was happiest playing Scottish dance reels etc. I believe that his musical talent was not wasted in Aultbea.

His army service began when he enlisted at Glasgow on 2nd April 1940. His Pay Book gives his former trade as barber. I know that during the war years and for many years afterwards he was always in demand for this skill. I never paid for a haircut until I left home! One of the photos we found shows him cutting another soldier’s hair presumably at Aultbea. I have no information to suggest when he was posted to Aultbea, but from the photographic evidence, he was obviously there from 1942 onwards, possibly earlier.

He rarely spoke about his time in the armed forces, other than to mention the happy times, but it is obvious from the few documents we have that he was in Maritime Royal Artillery. Whether or not he saw active service on the ships I have no information, although I have vague recollections of ship names being mentioned when he was reminiscing with former service friends. One of his closest and most enduring friendships was with Cyril Scott, from Barrow in Furness, with whom he was in regular contact and exchanged visits up until his death in 1985. I have included a photo of them together when they were each in their sixties.

From my viewpoint his most important encounter was with Wren Madge Martin.They met when she was posted to Aultbea, and struck up an instant rapport, culminating in their marriage in June 1943. My brother Richard was born 10th December 1944. After his discharge from the service in 1946, he moved to Raunds, Northamptonshire , my mother’s home town, where they lived out the rest of their lives, as valued members of the local community and active participants in the local Caledonian Society. The Raunds Town Council presented them both with plaques to mark their contribution to the war effort.

I was introduced to the world on 13th May 1948, after which they learned their lesson and decided to call the family complete. Dad worked initially in one of the many local boot and shoe factories, travelling by bus in the evenings to Wellingborough Technical College to gain his City and Guilds qualification in Carpentry and Joinery. He then worked for several years for a local building firm before starting his own business. Many examples of his work still exist in and around the Raunds area.

I feel sure that he would really appreciate the efforts to establish a lasting memorial at Aultbea.