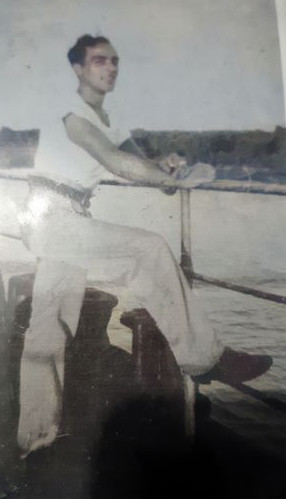 My father only received his Russian medal in 1985. unfortunately the one he received at the end of the war was lost.

Action non-stop from September 1939 until joining Empire Storm outward bound to Canada then action became fierce. Submarine surfaced and we had a running battle. Fortunately we sank sub and Captain and Gunlayer received medal from King George. In the action I was the gun trainer.

On leaving Montreal convoy was attacked by Wolf packs U boats which had gathered after Bismark had sank HMS Hood. At noon on 29th May 1941 U boat attacked and we were torpedoed midships. Just one lifeboat and a raft which broke free as the ship sank after 2nd torpedo. 3 men were killed, 45 survivors. I was ordered on to the raft to strip it of water and provisions but a swell hit the raft which sinking and I was adrift for hours before being picked up again. After being adrift in lifeboat for three days, we were picked up by SS Marita, a Norwegian very small ship. Therefore there was little first aid or medical attention. Five days later we were landed in St Johns, Newfoundland. The injured men were put in Holy Rosary Hospital and I was kept in suffering from nervous exposure and hypothermia.

After release we were put in the YMCA for two weeks until being transhipped to Montreal. During this time I had been reported missing. My parents had been notified by HM Government. I was on the Canadian manning pool for 3 months then I was sent to Baltimore USA. This was difficult as being of mixed race, I was segregated from the other men and in desperation to get out I joined the ST T J Williams which was supposed to load grain but when we arrived she was loaded with aviation spirit. 11 men deserted so we had to wait a week for completion of crew. We sailed for Halifax, Nova Scotia to pick up convoy tankers and munition ships were central columns. On 19th September 1941, a Norwegian Tanker blew up. TJ Williams was next and another 7 ships followed us, all torpedoed. Only one lifeboat cleared the ship. I was the last man to get to the boat. There were only 3 men in there before I made it and we picked up another 3 and pulled to HMS Sunflower. There were only 4 of us capable to take the oars as the other 3 were injured, 41 men perished. As we pulled to the Corvette, there were 7 lifeboats lining astern from other torpedoed ships. We pulled to the weather side as there were scrambling nets in position. I fell between the ship and the boat after stretching to make fast, but luckily for me 2 royal navy men pulled me clear. There were over 100 men taken aboard so there wasn’t much treatment we could get.

Four days later we were landed in Reykjavik Iceland and put in Caledonian Army Base Camp Hospital. After a week I was shipped aboard HM Troopship BERGANFIORD for homeward passage. On return I found I was the sole survivor from TJ Williams. When I got home I was put on penison at 100% but found it hard to survive so went back to sea without letting anyone know.

Joined the Empire Howard with a cargo of high explosives and war materials. Joined the convoy from Loch Ewe to Reykjavik. On leaving the weather was serious. Further north 16 ships and 2 escort vessels returned and 8 ships carried on. Our ship had to be used as an icebreaker for destroyers and corvettes, so not surprisingly we were taking on water forward and also lost a blade off the propeller. With planes attacking, U boats attacker the cruiser and torpedoed the Empire Howard with 2 torpedoes. The ship vanishes within seconds. Men in the water are in more danger as seamen know. Escort ships can’t think of survivors at times like these as the enemy was there and had to be destroyed. The HMS Lord Middleton eventually picked up survivors but most had been blown to bits as the depth charges had been so severe. I had lost consciousness but was told I was lucky as after being originally put with my dead shipmates someone had found a pulse before I was buried at sea. Out of 65 shipmates only 14 survived.

On arrival to Murmansk I was put aboard HMS Edinburgh. I was in sick bay with frostbite, exposure, nerves and unable to talk properly. Before leaving we were put aboard the HMS Bulldog as the cruiser had too many amputation cases aboard. On leaving Murmansk, the German battle fleet engaged destroyers and cruiser and HMS Edinburgh was sunk. After the battle I was on the destroyer for nearly a month before I got home. Still on 100% war pension I was told to stay home and take light work, but after a while I went back to sea.

I joined the Empire Snow with a cargo of high explosives and war materials and went back to Murmansk. This time from leaving Iceland, there was no peace and we lived on the gun platforms and nerves and exhaustion had everyone dead beat.