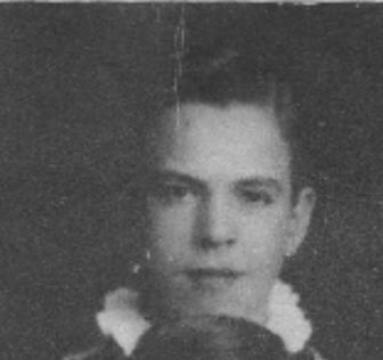 Sadly all the living relatives know about Edward is his birth date. He was in the Royal Navy and a Shipmate of Ken Tipper. At 20 years of age he perished in the Arctic aboard HMS Punjabi. My story centers around my quest with the help of Ken to have Edward’s name put on his local War Memorial.

I was about 7 years old when I was told that my father’s cousin had been killed in WWII. Not one member of the family seemed to know the why or the wherefore, only that he had been lost at sea.

Fast forward to about 1980, when my cousin, Pauline North started to research our family tree. It was early in 2011 when I received my copy of the family tree dating from 1600 to present day. I ascertained from Pauline’s research (circa 1980, before internet) that our great uncle, Thomas Farrance had been killed on the Somme in WW1 and my father’s cousin Edward had been killed aboard HMS Punjabi at Scapa Flow during WWII.

On Remembrance Day, 2011, I went to the Dewsbury War Memorial in Crow Nest Park, Dewsbury Moor, to pay my respects. It was then that I found that only Thomas Farrance and not Edward Farrance was on the Roll of Honour. I wondered if this could be remedied, but where could I go? I emailed both the local Council and The British Legion but received no reply from either of these bodies.

I did some of my own research on the internet to find out about the loss of HMS Punjabi. The sinking of the Punjabi was a collision accident with battleship HMS King George V. Due to the sensitive nature, and not wishing to alert the Axis to the damage to King George V and other capital ships on convoy duty, survivors from the Punjabi were “ordered” not to disclose the facts. Myself and Pauline seem to remember seeing a news article stating that Punjabi was sunk by a torpedo from a German U-Boat, with the loss of all hands, off the south east coast of Ireland.

The true facts were not made public until late 1945. This also stated that it was off the coast of Ireland and not Iceland. Could this be the reason why Edward was not included on the memorial, although he is commemorated on the Royal Navy Memorial at Plymouth.

The 1st May 2012 was the 70th anniversary of the sinking of the Punjabi. I went to the War Memorial to pay my respects. On the same day, on the internet, Ken Tipper posted a memorial from his home in Florida, USA. I was extremely surprised and pleased to find someone who served on the Punjabi, possibly alongside Edward, and made it in my way to get in touch with him through the internet. Ken Tipper has been extremely helpful and forthcoming with information about Edward’s passing and agreed to help me in my endeavors, even writing to our local newspaper “The Dewsbury Reporter”.

At the same time I found out about 2 local gentlemen who were trying to get other names added to the War Memorial. I got in touch with one of the gentlemen, Mr. Robert Scaife CBE, who I hoped could assist me in putting Edwards name in its rightful place.

I was also put in touch with Dewsbury MP, Mr. Simon Reevell who said that he would assist me in any way that he could. The next thing that I knew, I had a phone call from Mr.Reevell saying he had made some enquiries on my behalf and that at a rededication at the War Memorial on 20 May 2012, Edwards name would be added to the Roll of Honour alongside another 24 names from post 1945 conflicts.

The whole experience has been both emotional and uplifting for myself and other family members, and has put me in touch with many people and organisations, including the Russian Arctic Convoy Museum Project. One of the things that has resulted from this quest has been meeting up again with the late Edward’s nephew, my cousin Edward, who was not aware of the War Memorial omission. Along with Edward’s extended family we had an overdue reunion. Edward’s sister produced a picture of Edward Snr. when he was 9 years old. This and Edwards 3 WWII medals, which are in the keeping of Edward Jnr., are the only surviving tokens of his existence.

I wish to sincerely thank Ken Tipper for all his help and encouragement and my cousin Pauline North who started the ball rolling in 1980 and has helped me through everything.

Ken Tipper’s own story is told on his section on this website.

The passing of Ordinary Seaman Edward Farrance in those icy Arctic waters 70 years ago has been put right and has brought his family closer.

Photo: This is Edward with younger brothers William (middle) and Ernest (lower), we guess Edward to be about 14 or 15. They were choirboys at the church, which is next to the park where the War Memorial is that proudly bears Edward’s name.