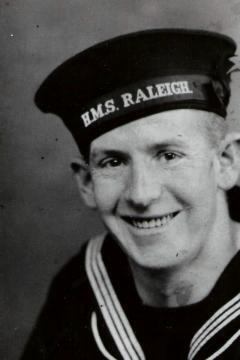 Edward Thompson, Ted, was born in 1916 and raised in Blyth, Northumberland. He was a plasterer by trade; joining the Royal Navy in October 1940.

After DEMS training he served as a gunner aboard merchantman SS Harmonic, a 4,558 ton cargo ship built at Thompson’s yard in Sunderland. During his service aboard Harmonic, Ted sailed in several convoys from April 1941 onwards; notably Arctic Convoys PQ1 and QP2 which departed Hvalfjord on 29th September 1941 for Archangel, returning to Kirkwall 17th November 1941.

The convoy was attacked by enemy aircraft but both the outward and return convoys were completed without loss. SS Harmonic was eventually torpedoed and sunk by U-172 with the loss of one of her 47 crew on 15th July 1943 en route from Buenos Aries to Freetown in Sierra Leone. However in August 1942 Ted had transferred to SS Lancashire on convoy service in the Arabian Sea/Gulf of Oman, again as DEMS gunner.

In January 1944 Ted transferred to SS Llanberis and then to SS Pencarrow in October that year where he saw out the war to discharge in March 1946.

On demob, Ted returned to Blyth and back to his trade as a Plasterer alongside older brother Aaron who had served as a stoker aboard destroyers HMS Kelvin and HMS Foxhound throughout WWII. He married Lily and together they raised four children. Sadly, Ted’s life was cut short when he died aged 55 of peritonitis.

The Arctic Star was awarded to Ted posthumously in May 2014 on application by his family.