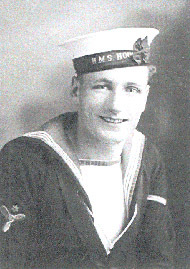 Written and photos by Ernest Alex Kellaway, originally posted on the website of HMS Hood. This is an extract from Ernest’s book about his experiences in the Royal Navy. The complete text is available on the HMS Hood website.

Over the last few years I have read many true stories relating to the experiences of service personnel and I considered that it was possible for me to add a collection of my experiences of over twelve years service in the ROYAL NAVY.

On sitting down to relax and set my thoughts to the subject it dawned on me that I had been and not seen, it was like the song I JOINED THE NAVY TO SEE THE WORLD, BUT WHAT DID I SEE, I SAW THE SEA. It is now apparent to me that my time in the navy was in the wrong era.

I joined the navy in 1936 and after many good instructive, active years living with very amiable companionship, learning how to live life to co-operate to the advantage of everyone I left in 1948 and it is not until recent years that I realised I had seen very little of the world. The account of those years that follow will only be of incidents that have become implanted in my mind either because of their serious nature or the humorous nature.

It seems impossible that I could have travelled so many miles in so many months stretching over ten and a half years at sea, aboard ships as a crew member and seeing so little. I have often thought about this, coming up with the same answer every time it was the prevailing circumstances during those years.

Looking back over those years they were extremely troublesome times, though as an eighteen year old lad the problems of the world were not in my thoughts I only wanted to join the navy quite unaware of what was in store for me.

It was only after the months of my initial training and joining H.M.S. HOOD that I became aware that there was a totally different world to what I had been accustomed to, I would say that until the ship joined the Mediterranean fleet I was totally unaware that there was a civil war in Spain. This war did curtail the movements of our ship in that we were employed with other nations on non-intervention duties and during over two years in the Med, the Hood never passed east of Greece. This period of time was the start of my lack of visits to various places that would have been possible in untroubled times.

During my time on the Hood our main base was Malta this we stayed at quite often, there was Gibraltar our second base which we stayed at on several occasions running from either of these to perform our duties. The first place the ship visited being Tangier a free port in Morocco, here I saw very little as only limited leave was given and this pattern of leave seemed to be the norm during Hood’s commission in the Med, though on some occasions in other ports of call more extensive leave was given.

The ship did visit Gulf Juan on the French Riviera were we stayed for many days with night leave being given this did give the crew opportunities to visit outlying places. I would say that this was the only occasion while in the Med that the opportunity arose for extra leave to be given.

During those years in the Med the Hood visited Oran in Algeria, Palma in the Balearic Islands, Corfu, Argostoli, and Navarino, Greek Islands, and as mentioned before Tangiers and Gulf Juan with a few days in Marseille France.

I have often thought about this, which brought me the same answer every time, it was the circumstances prevailing in those disturbing years before World War II.

It was very fortunate that Hood was called back to England for the Coronation of King George VI this did give us extra time at home and on the return journey to the Med the ship called into La Rochelle were each watch did get a few hours ashore.

I have now remembered that the Hood did visit Split in Yugoslavia for the birthday of the young King Peter, the crew were allowed afternoon leave not much time for sight seeing, though the swimming was very good.

That preamble will give the reader some idea of the few places visited during the Hood’s commission in the Med, what did we see we saw the sea.

After maintenance in Portsmouth the Hood proceeded to Scottish waters mainly Invergordon and Scapa Flow here leave was very restricted as there was very little to do or see at these places. By now World War II, had started and after a few sorties seeking German ships I spent time in Portsmouth on a training course before joining H.M.S. Cossack, the next year was spent on convoy, fleet escort and attacking enemy convoys during which time I did manage to visit Reykjavik in Iceland but only for a few hours. Plenty of sea but no exotic places to visit.

I was then returned to Portsmouth for training before joining Coastal Forces which then took me to the West Coast of Africa the boats employed on convoy duties running between Bath Hurst [now Banjul] in Gambia, Freetown, Sierra Leone and Takoradi, Ghana, with one escort duty to Monrovia, Liberia. Leave was given when possible but only from 2pm until 6pm not much time for sight seeing.

After approximately eighteen months I was returned to England and after a training course at Portland went to Felixstowe, Suffolk the boat I was drafted to operating as a mine layer, not much chance of visiting foreign countries. I was then returned to Portsmouth, and then drafted to H.M.S. Skate.

Skate was mostly on escort duties from Londonderry, Northern Ireland to Iceland and part Arctic convoys before going to Plymouth until she went for scrap, still no foreign sights.

Another return to Portsmouth before joining H.M.S. Loch Tarbert a Frigate employed on convoy duties in the Atlantic until VE day, still plenty of sea but no social visits. The ship was then sent to the Indian Ocean to assist in the war against Japan. Though Tarbert visited many ports leave was such that it was not possible to enjoy the exotic East.

When Tarbert returned to England I was then drafted to H.M.S. Concord a destroyer going to the Far East, though, the war had ended the opportunity to visit Eastern cities or towns was limited and as my twelve years was drawing to a close I joined H.M.S. Cockade to return to England for my discharge.

The reader may see from this introduction that though I traveled many miles the possibility of sight seeing was very limited.