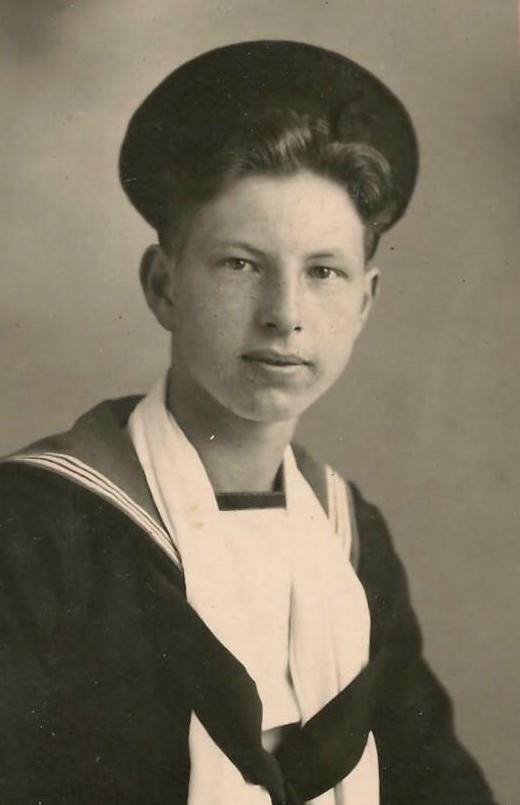 At the start of World War II Ernest Farr was working for a leather goods manufacturing company in Hull which was bombed out. He went to work in the company’s Cleckheaton branch where he served with the Home Guard.

Ernie joined the Royal Navy on 8th February 1943 at the age of 17yrs 7mths. After 6 weeks’ initial training at Chatham he went to Campbelltown in Scotland for a 6 week ASDIC course learning to use the equipment to detect submarines. From there he had a week’s further training on the HMS Shemara, a 210 foot motor yacht which, having only been built in 1938, had been requisitioned by the Navy at the start of the war as a training vessel for anti-submarine warfare.

Ernie went from the Dunoon Naval Base to Edinburgh, kit bag on his back, expecting to join his ship, HMS Obedient, only to be told at the dock gates that it had already left. He was told to board another destroyer which was destined for Gibraltar where he would be able to join the Obedient. He says that he sat by himself on deck with his kit bag, a young 18 year old, wondering what was about to come.

On 18th August 1943 he joined HMS Obedient in Gibraltar for training exercises. Soon after there was a submarine attack so he was definitely in at the deep end.

In the ASDIC section there were 5 operators plus the leading operator. The 5 shared a mess with the sick bay artificer, or tiffy, 2 cooks and other miscellaneous crew. This proved to be useful when he started taking photos around the ship with his box camera and needed somewhere to develop and print them. The tiffy suggested that they used the sick bay and, if it happened to be occupied when needed the patient would be moved out while the cabin was blacked out and the negatives developed. A good little business ensued as all the crew wanted photos to keep or send home.

He remembers well, as the youngest in the mess, he was the rum bosun – going to collect the rum rations even though he was too young to get any. After doling it out to the other mess members he usually managed to get a tot! Everyone had a bottle in which they would sometimes save their rum for later and some trading of “sippers” for small favours or “gulpers” for larger favours happened. Another way of getting a little extra cash was as a dhobi wallah – taking on washing for other crew members. Everyone had nicknames and Ernie soon became known as Tommy after the famous boxer of the time, Tommy Farr.

The ASDIC operators generally had some free time between watches as they were only on duty for 2 hours at a time except at critical times when all the operators would be in attendance together. Every time they were in port they had to have their ears syringed to keep them clear for the job in hand.

At the end of April 1944 HMS Obedient was involved in the disastrous Operation Tiger in the English Channel. This was the secret rehearsal for the D-Day landings which went horribly wrong when German patrol fleet picked up the enormous flotilla of vessels on their radar and attacked. The crew of the Obedient were part of the operation to recover the hundreds of bodies from the water. They were also involved in the actual landings in Normandy.

HMS Obedient took part in a number of Arctic Convoys. When the ship was iced up it was all hands on deck to clear the ice. One incident stands out in his mind. They were attacking a submarine when they got the order to leave the attack and another ship took their place. This ship was sunk.

Following Victory in Europe HMS Obedient escorted the cruiser Norfolk on a flag visit to Bergen. He has photos of the troops marching down the roads. While they were in port the crew set up a playground on deck, fixing up slides and rides, for the local children. They spent sometime in the Kiel Canal, with the collection of surrendered U-Boats. They were deployed as guardian ship in the Baltic ports and while in Travemunde a sports event was organised between the naval crews. Ernie took quite a few action shots which must have been popular to send home.

In July of 1945 the Obedient escorted the USS Philadelphia through the Channel. The USA president, Harold Truman, was on board heading for the Potsam Conference with allied leaders.

In August of that year, during a visit to Tromso, they took Hitler’s yacht Graf as a prize. A skeleton crew were put onboard and they escorted it to England where it began a tour of the country. The names of Hitler’s right-hand men were on the cabin doors.

Ernie left the Obedient on 18th July 1946 at Portsmouth and was demobbed from Chatham on 20th July 1946.