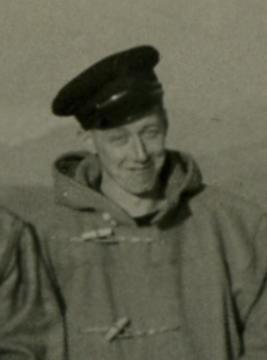 Ernest joined the navy in February 1943, at HMS Impregnable, Devonport. He was transferred to radio mechanics course and after 3 months basic training was transferred to FAA FX593745. He continued training at HMS Ariel, Culcheth, Lancs. and passed out as L/RM(AW) in November 1943. He was then posted to HMS Nairana, a brand new escort carrier, based at Greenock.

In Nov 1944 they transported about 100 Norwegian Army personnel to Murmansk (Operation Crofter). Five sergeants were guests in the PO’s mess.

Says Ernest, “Twenty years later I met up with one through work and visited his home on Oslo Fjord. He told me that one of the sergeants was Thor Heyerdahl, by then famous for Kon Tiki expedition.”

In May 1945, at the end of the European War, Ernest was posted to Middle Wallop and kitted out in army battle dress. In August 1945, whilst on embarkation for the Far East, the Atom Bomb brought a quick end to the war. Nevertheless, he went to Singapore via NZ and Australia by troop ship, arriving on 5 Nov 1945. He was demobbed from there in June 1946.