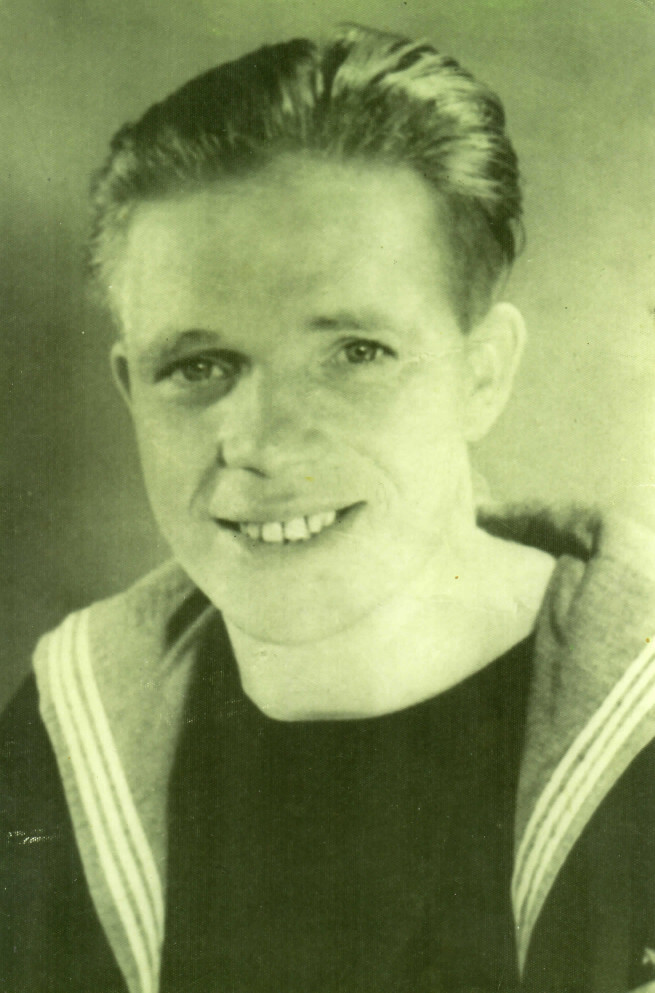 Born Forbes Jamison Aitken on the 13th July 1926 at Keig in Aberdeenshire my father joined the Royal Navy around the age of 18. He served on board HMS Campania, we believe from accounts from his ship mates that he was a deck hand, aircraft handler. On 22nd Feb. 1945, while returning from Russia, he suffered a serious head injury (we still have the “Report of Wound or Hurt”, it is really the only piece of documentation we have relating to his service). He suffered a fracture to the skull, and was knocked unconscious. His life was undoubtedly saved by Able Seaman Alec W Penstone who, along with a second unknown crewmate, pulled him from the water, which, as can be seen from Alec’s account, was on fire at the time! Unfortunately, we are unsure as to how his service continued from there.

He also spoke of serving on HMS St Austell Bay, which, having checked, did not come into commission until May 1945, so must have been after his Arctic Convoys Service.

I have attached a photo of my father, along with a copy of a Christmas card that was sent to family from the Campainia. Below is an account of my father’s injury, which was supplied to me by Alec Penstone, who still lives on the Isle of Wight, and with whom I am in regular contact.

“…I never went ashore there [Loch Ewe],but got a good view from the flight deck, as was the last friendly shore we saw for 3 or 4 weeks until we got back to Port Glasgow, if we were lucky! Now to convoy JW64. We left Tail of the Bank, on Feb 3rd 1945 and joined our escorts at Loch Ewe. Then on to Iceland to pick up the merchant ships and our rescue trawler Northern Gem, and we sailed late evening,to get as far away during the night.

We sailed through a fleet of Icelandic fishing boats, and our WT boys reported that very loud WT, was coming from some of the boats as the enemy had supplied them with long range transmitter sets. At first light, we saw our shadower a long range twin engined plane,so we knew it would be long before we went to action stations. I think it was not long before we lost our first merchant man, and we lost two more. HMS Lapwing and HMS Denbigh Castle also were sunk at the entrance to the Kola Inlet, but we had arrived in Russia.

We we’re there until the 17th when we were the escorts for the return convoy RA 64. As soon as we got out of the Kola Inlet, I was on the ASDIC set, doing one degree sweeps for 10 degrees across the bow, as German aircraft had laid a mine field across our path. As we cleared the mine field I was told there was a pack of at least 12 U boats ahead waiting for us. Before we got clear we lost two merchant ships sunk, one went back to Murmansk badly damaged. Two days later we lost 2 more – one by a U boat and one by a torpedo attack by aircraft, and HMS Bluebell by a torpedo. Only 1 survivor picked up.

Then the weather turned really nasty. Wind speeds up to  90 mph and 60 foot waves, so the captain decided to run before it. The wind increased to 126 mph, and for 3 days we were heading for the German held, Norwegian coast with waves washing our flight deck. So the captain said at 16 00 hrs, the ship will turn about. Every thing movable is to be triple lashed down.

I was told to raise the ASDIC dome and secure the cabinet, and return to my messdeck which was one deck below the embarkation space. So I thought the best thing to do, was to sling my hammock, fore and aft, put on my lifebelt, and climb into my hammock and hope the best. When the ship was built in Harland and Wolfe in Belfast  I stood by her, until she was fitted out, and I watched her in the tilt basin, and she went over to 33%, which was said was the point of no return. I was thinking of this as I was in my hammock as the ship rolled further and further on her Port side then with an almighty crash, the embarkation burst open and tons and tons of Arctic Ocean flooded into the messdeck and shearing the welding holding our two tier lockers. We rolled over 45% and then we rolled back to 45% to starboard and I watched on as one of the lockers hit one of my shipmates and crush him against the bulkhead.

As the ship’s head turned the rolling eased. As we headed into the wind it was like riding a roller coaster. The high octane vent pipes were on our messdeck and petrol spilled into the water ,which then caught fire, which made me get out of my hammock very quickly and with the help of another messmate grab the lad who was out for the count and get him up the stairs to the sick bay. We had a war correspondent on board and he said  Germans would have cursed, Italians would have cried, but the British sailors were laughing. I don’t know where he was. He certainly was not on our messdeck!

We had to go into dock for repairs as our steel flight deck took a bad battering, and the aircraft lift came off its rails. We done two more Russian Runs, JW65 on the 12 March and RA65 on the 23rd back to the UK.