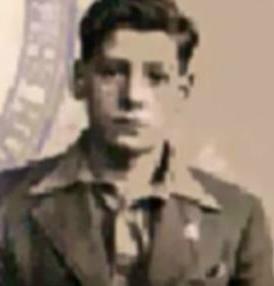 Francis joined the Merchant Navy in January 1943, at the age of 16. The first ship he was supposed to join was hit by a mine on its way in to the port and all the crew were lost. He was then sent to join the Empire Ploughman as a cabin boy.

Francis recalls: “The cargo consisted of aeroplanes and ammunition which was all boxed up and stored in the hold. There were also tanks which were fully assembled and stored on deck. The ship then sailed from Loch Ewe. When sailing on to Murmansk we encountered a storm which caused the convoy to hove to in Akureyrie, in Iceland. We were held up in Akureyrie or one or two days.

The convoy then sailed on to Murmansk. We then continued our journey and at Bear Island the convoy came under attack by 10 U-Boats. The Commodore ship was sunk and I was on the Vice Commodore ship. I witnessed the attack on this ship and could see small lights moving down the side of the ship which looked like fireflies. This was the crew climbing down the scramble nets, abandoning the sinking ship. We were not allowed to stop to pick up any survivors, as a safety measure for our ship.

Our ship survived the attack and finally arrived in Murmansk and onward to Archangel. We then sailed up the estuary from Archangel to Bacaritsa. As we entered the estuary the river was completely frozen. We had to be escorted by an Ice Breaker. The traffic was crossing the frozen river in front of us. The policemen on duty then stopped the traffic.

The Ice Breaker then crushed the ice and we were able to sail through. I was situated at the stern and was amazed to see that within 15 minutes the ice was re-frozen and traffic was again crossing the frozen river behind us.

The return journey was quite uneventful. The whole round trip took approximately 3 months.”