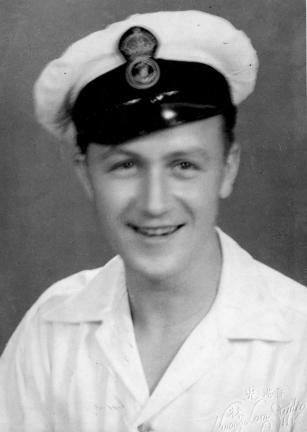 Francis John Boyle (known as Frank) served on HMS Norfolk on escort duty on the convoys around 1942-43.

Born on the 17th November 1923 in Grangemouth, Scotland, Frank did his Royal Navy training at Chatham and became a Petty Officer. He served on HMS Norfolk, based in Scapa Flow (and possibly also served on HMS Anson).

His duties included bombarding the Norwegian coast and by 1944 he went into Normandy on D-Day+1 to help repair damaged landing craft and get them off the beach. Later he sailed to the far east and served on HMS Tyne in Sydney and also went to Japan just after the end of the war.

The image is a card Frank kept from the club on Flotta at Scapa Flow. As his son says “It seems like it was a fairly civilised place. Not too much wild entertainment on hand”.