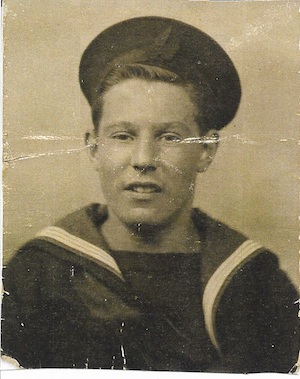 I enclose the letter received from Freddie, what he has failed to mention is that when the ships railings were removed by the high waves, the crew continued working by being tied to ropes to enable them to carry out duties on 2″ thick plate deck ice, he said his biggest memory is of the ferocity of the waves on all of the journeys. All the best – Martin

“I signed up to the Royal Navy in October 1943, aged 17 and 4 months, and joined HMS Serapis in June 1944, just after D-Day. We sailed on the Western Approaches. Our first job was to escort the Queen Mary back from America with Winston Churchill aboard.

We didn’t know what speed the Queen Mary could do, and we were experimenting at speeds of around 32 knots as we were heading out to meet her. One day we spotted her Aldiss lamp signal on the horizon so the skipper gave the order for us to turn around and, as we were going flat out, to button everything down. We turned at maximum speed with everything in the ship rattling, while the Queen Mary sailed on by and left us standing. She could move!

We then had to escort HMS Royal Sovereign (an old cruiser) to Russia with HMS Savage, one of our sister ships. That was a piece of cake really and felt more like a luxury cruise. It was cold, of course, but an easy trip. After we left the Royal Sovereign at Poliarno, we made our way back to Scapa Flow and then spent 10 days with the Duke of York battleship and three aircraft carriers, with various cruisers and destroyers, looking for the Tirpitz. That was a German battleship, reported by intelligence to be in Narvik Fjord. She was said to be under a coastal ledge hiding out. We couldn’t get up close to the coast so we were doing a square sweep around waiting for air support to make an attack. We sailed round and round for 10 days – really boring – but the air strike never came.We were ordered back to Scapa Flow, just before the Tirpitz was sunk by the aircraft of the Coastal Command on the 11th day – so after all our wanderings around the fjord we missed the main event.

We went down the west coast to Merthyr Tydfil in Wales as our ASDIC (submarine detection system) was out of order. We were going to get it fixed which meant missing out on the next convoy to Russia. However, a new Engineer Commander came aboard and inspected the ASDIC. He said we were ok to pursue the convoy and we picked them up on the western side of Scotland and sailed forth towards Russia. The convoy was headed to Murmansk but our escort stopped at Poliarno. During this convoy our ship was the emergency destroyer, and we picked up an airman who had gone into the sea. As he had come in to land on his carrier, he had overshot the landing deck and the plane went into the sea. When we went to find him, he was covered in blood so we thought e was badly injured. It turned out that the blood was seepage from the pressure of hitting the water and actually he was completely unharmed. We took him to Russia to re-join HMS Campania there. As we left he flew a victory roll for us before setting his plane down – on the deck this time.

I remember one time, Nobby Clarke, an able seaman, jumping into the Orlican cab (which is a gun control seat). He was only a cleaner, meant to be maintaining the gun, but he was very hot on aircraft recognition, and he let off a round of ammunition. This was illegal for a man of his rank to fire, and he was immediately put under guard. He reported that he had seen a Junkers 88 aircraft, however, and that he was firing at it. When we arrived in Russia, they moved him to another ship and we all went back to Scapa Flow. The authorities gave him a medal when we got back as he may have saved the convoy.

Another episode was when our emergency destroyer had the job of rounding up the Yanks who tended to sail out of the convoy. They thought they could manage alone and were never slow to tell us to mind our own business. If they were too far away we had to leave them to it, and those we never saw again. We were running short of fuel one day when a Yankee tanker was able to get a line into the foc’sle, into the starboard fair lid. The turns for fixing to keep the line free were not completed properly though and the line broke. The ship was already covered in ice and now also covered in crude oil, which took a very long time to clear up.

My job as a Quarter Master was to steer the ship. There was always a rivalry between the stokers and the seamen – probably still is! One day the Leading Stoker came up to me and said “Anybody could do that job!” I asked permission from the 1st Lieutenant for the stoker to take the wheel, and permission was granted. Now a good Quarter Master could drive within 1-2 degrees either side of the set course, depending on the weather. The stoker was 5 degrees out one way and then 5 degrees out the other way. He soon asked permission to hand the wheel back and the 1st Lieutenant refused. He had to continue until he panicked so much that I took over the wheel again.

The weather on the convoy journeys to Russia was very icy but it was a dry cold. Not cold and wet like it is here. We didn’t wear lots of clothing: a duffle coat and gloves were fine, but you couldn’t touch anything metal or your skin would stick to it. We were ordered to elevate and depress the guns every half hour to keep them free to move.

The sea could be very naughty – at one time our guard rails were flattened by the pounding of the waves. I remember HMS Keppel coming in to Scapa Flow with her wooden mast broken off above the funnel, and falling to one side in the foul weather. Her captain was deeply distressed at the damage she had taken.

At the Russian base there was one big ‘Red Army’ Hall for the Russian sailors’ entertainment. The sentries at that base were women and our seamen used to make jokes at them, but they didn’t bat an eyelid as they didn’t understand what was being said. They also had old men of 65-70 as guards there, and these got a regular supply of vodka as part of their allowance.

Poliarno was a desolate Russian submarine base, home to 9 subs and various motor fishing vessels which were used to escort them. The subs used to go out one by one up the Poliarno Strait and then return. They never seemed to go any further afield than that. I’m not sure what use they were.

Poliarno was in the district of Murmansk. And there was a youngster there who knew more about Scotland than we did, as he had lived there for a while.

On our way back to Scapa Flow from Russia, our flotilla lost 2 ships, the Lapwing and one other bird-class frigate, to German submarines. Unfortunately, we couldn’t stop for survivors because of the subs.

Most of the people who were the real heroes are dead – those who made a choice about taking a risk. Mostly you just acted on impulse and got on with it. I remember one occasion when a gun misfired and the Gunnery Officer gave the “clear gun” order. This meant that the gun layer had to open the breach to release the unfixed ammunition. I was the Communications Officer and, as I was wearing headphones, I had to catch the unexploded canister which was red hot and throw it over the side. We then had to put in a star shell charge to clear the gun.

I wasn’t on the convoy for long. I spent 6 months on a minesweeper in Malta, then I was taking USA lend-lease boats back to the States via the Azores and Bermuda, with HMS Clinton. We had nothing to eat at Christmas except boiled eggs – all we had left on board. It was 2 days after Christmas when we came into Norfolk, Virginia, and they gave us 3 turkeys to share between the 14 of us aboard so we had a good feed up then to make up for it.

We then had to go on to Nova Scotia by train and had a really boring 4 days and nights on that train, before boarding troop ship SS Aquitania to come home. We landed in Devonport at the end of January 1946.

Shortly after the war ended, I was based in Malta. We heard that 2 ships, HMS Volage and HMS Saumarez had been sunk by the Albanians off Corfu. We were sent from Malta, on a 2 day journey, to try to pick up any survivors (which was a joke to expect any to survive that long!) When we arrived, we saw that HMS Volage had been cut in two, and HMS Saumarez sunk, with up to 40 lives lost. We towed the Volage’s foc’sle back to Malta but Saumarez was left in Corfu. This episode was never talked about any more at the time and I have never heard it mentioned since.