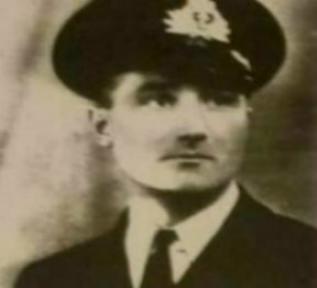 In 1927 Frederick William Hawkins joined the merchant navy as an officer cadet with the Furness Shipping Company. Three years later he joined the royal navy volunteers reserve as a probationary midshipman and a year later joined the Finnish 3-mast Loch Linnihe as a 2nd mate.

In 1933 Frederick joined an Egyptian shipping line where he obtained his Masters Ticket. By 1937 he was a Sub Lt RNVR and joined on a full time basis and was then sent to train as a gunner on HMS Drake and, during that year, was on HM Submarine H33 at Gosport. In July he transferred to the Royal Navy as a Lieutenant. He served on HMS Spearfish (submarine), HMS Colombo & HMS MacKay.

From 1940-1942 he was the Navigating Officer on HMS Nigeria (PQ17). While on HMS Nigeria he led a team of Royal Marines on raids on the Lofoten islands, blew up radio stations and destroyed coal mines. He told his wife that the worst job he ever had to carry out was shooting the pit ponies. In August 1942 he reported to Commander Ryder for special duties. Given command of HMS Woolston in September 1942, Frederick was involved in the invasion of Sicily. The ship escorted the troops into the shores and opened fire on enemy aircraft.

In October 1943 he was appointed to command the HMS Boadicea and returned to escorting Arctic Convoys on Boadicea until April 1944. This made a total of 15 Russian Convoys he had been involved with. Boadicea escorted convoys to Kola Inlet (JW57 & RA59) in January 1944. In March he saved the lives of three u-boat crew (U973, Convoy RA57) which had been sunk by allied aircraft.

On D-Day, June 1944, HMS Boadicea escorted the follow-up force ‘B’ in Operation Neptune (top secret). HMS Boadicea had left Milford Haven with another convoy when, at approx 4.30am a Junkers 88 made a surprise attack on the leading ship (Boadicea). She was hit by a radio controlled bomb and sank within 2 minutes.

170 men were lost including Frederick.

Frederick’s son, John, has sent diaries, documents & photographs to the Russian Arctic Convoy Museum & to a museum in Finland. He also has some wonderful photo albums his Father kept during the war.