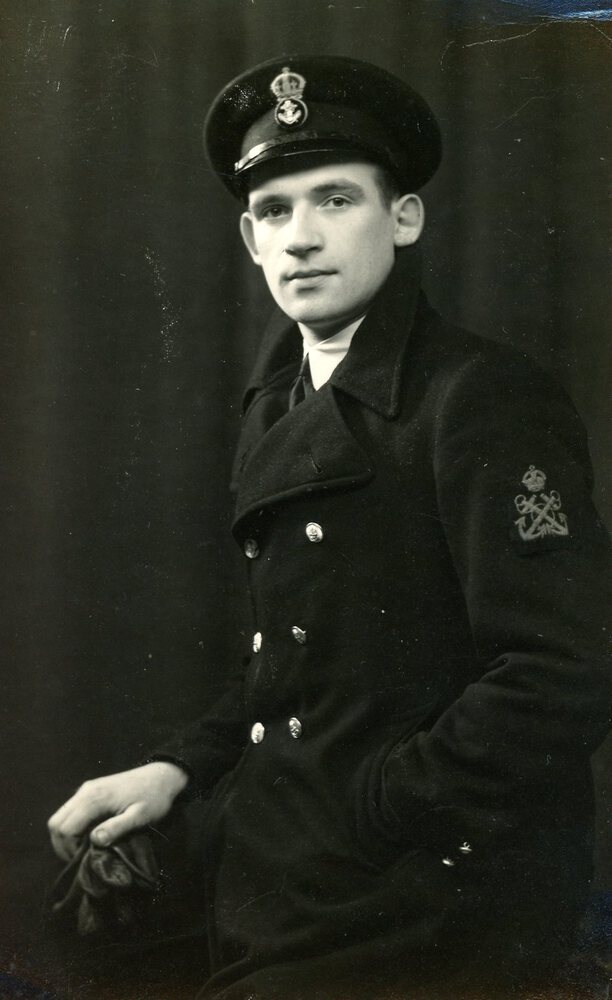 Fred Pearce joined the Navy in January 1938 and served until October 1960. He left his 5-year apprenticeship with Rouch and Penny in Bristol, after serving a little over 4 years, to join up. He spent the majority of the war aboard the aircraft carrier HMS Furious, where he progressed from EA5 to EA3, up to March 1943 and then HMS Defiance to June 1943. He then joined HMS Spartiate (Hardy) where my interpretation of his service record suggests he joined the working up of HMS Hardy until August 1943 where his record then shows HMS Tyne (Hardy) which indicates to me that he was part of ships crew when Hardy was assigned to Tyne as her depot ship. If anyone has more or better information then I would appreciate hearing it.

On 30th January 1944 at 03.57am, HMS Hardy, pennant number R08, whilst protecting Arctic Convoy JW56B was hit by a torpedo fired by a German U-Boat. Hardy sank at 05.24am with the loss, I believe, of 35 of her crew. All this happened just south of Bear Island, far north of Norway inside the Arctic Circle, at 73° 40’N, 24° 30’E. Frederick Pearce, EA3, was on board and had it not been for a combination of HM Ships Venus, Vigilant and Virago coming alongside and taking off all survivors, my sister and I, and his three grandchildren would not be here today. RIP all those lost then, and since.

My Sister tells me that my Father, toward the end of his life, told her that between being hit and finally being sunk (by a coup de grace torpedo from HMS Venus) he went below a few times to ensure all of his junior EA’s and others got out safely. Nothing unusual in that I’m sure, in that all RN personnel would have done everything to look out for their shipmates.

After rescue from HMS Hardy Fred returned to Scapa Flow from the Kola inlet aboard HMS Savage and then onto HMS Drake (Devonport) before joining HMS Capetown in April 1944 and Normandy Beach Landing coordination duties from D-Day through to October 1944. After this, he served all over the world, including Korea. I have some photo’s of ice encrusted upper decks which I thought might have been associated with the Arctic convoys, but upon investigation, are in fact from Korea in 1952/3.