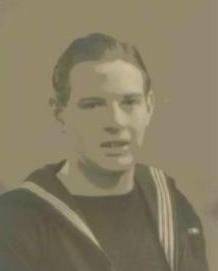 In 1942, aged 18, I volunteered for the Royal Navy. I was called up on 17th March and sent to HMS Royal Arthur ( Butlins Skegness). After initial training I was sent to Chatham Barracks. After a short stay at Chatham I received a movement chit, telling me to line up for a “Bag Meal” and proceed to the waiting train. Unfortunately after waiting some time in a long queue we found all the Bag Meals had gone, but never mind we would get some food later! The train left Chatham at 13.00 and eventually arrived at Glasgow 06.00 next morning, still without food. The good ladies of Glasgow were waiting for us at a big hall with large bowls of Porridge, unfortunately, made in the Scottish manner with salt (not to us Southeners’ taste!)

I was lucky. I fought my war from the relative comfort of the Wireless Office. After the non breakfast we were bussed to the docks and Joined HMS Milne, newly built in Glasgow, an M Class Fleet Destroyer and Capt.D of the 3rd Destroyer Flotilla. We sailed on our first Convoy, PQ18, on 9th September 1942.

We met up with some of the crews from the ill fated PQ17 and received dire warnings as to what lay ahead, unfortunately some of it proved correct. They were very bitter about being ordered to leave the Convoy. It was the first we had heard about it. A lot has been said and written about the hardships and danger of the Arctic convoys but not a lot about how we lived and worked on board. At first we sprogs were virtually clueless about life on board. We had a sprinkling of older experienced men in each mess and learned from them.

On the small ships we worked the mess catering system, meaning each mess received their ration of Meat and Veg or whatever, prepared it and sent it off to the Galley for cooking. On our first Convoy we received a ration of Potatoes, they were frozen solid having been stored in the Veg locker on the upper deck. On thawing out they were just like sponges, we squeezed the water out and finished up with a handful of withered skins, not very edible. On future convoys we were issued with dehydrated vegetables, Potatoes, Carrots and Onions etc. I can’t recall what we did with them as regards cooking but we didn’t starve. (On a subsequent convoy the Veg locker was torn off the upper deck in a violent storm, along with the ship’s whaler.) On the whole the food was good. We had plenty of meat. One of the highlights was the Pork Chops from America, they were huge. Fully an inch thick! at the other end of the scale was the Soya Sausages and Train Smash (Tinned tomatoes). If the weather was too bad we had to fall back on door step sandwiches of Spam or Bully beef or go without for a time.

We always had the company of rats on board. They used to scuttle around the electrical conduit trunking on the deckhead at night, it always paid to give the hammock a thump or shake before jumping in after a night watch.

Our dhobying was dried in a room attached to the funnel for warmth. One day the door was left open and all the washing was frozen solid. One lad recovered his white flannel shirt shaped like a U on trying to straighten it, it just split cleanly in two. It did get cold at times!

In October 1942 we went on a Mediterranean cruise to support the North African landings, a very welcome change in the weather.

On our return to UK it was back to Arctic convoys, sometimes going all the way to Kola inlet sometimes taking a Convoy out and picking up a returning Convoy and escorting them home. In December 1945 we sailed back to the Mediterranean carrying out various raids and bombardments. After VE Day it really was a Mediterranean cruise until we sailed to Harwich in April 1946 for Paying-off.

My only really scary moment was standing on the upper deck and watching a torpedo track pass directly under me, obviously set too deep for a mere Destroyer, he wanted a Merchantman. On a more serious note the real heroes of the Arctic Convoys were the Merchant Seamen, very often they sailed in Ships which were only just seaworthy, some of them could only just make the Convoy speed of 8 knots in a calm sea, when it got rough they really struggled.

All of us who saw a munitions ship just disappear in a cloud of smoke and fire, or watch an oil Tanker on fire with burning oil in the Sea all round, knowing there were men in the ship and sea and not being able to do anything about it is impossible to forget.

What kind of men were they to do this voyage after voyage knowing they had no chance of survival if they were hit. These men deserve the Ushakov Convoy medal not a substitute.