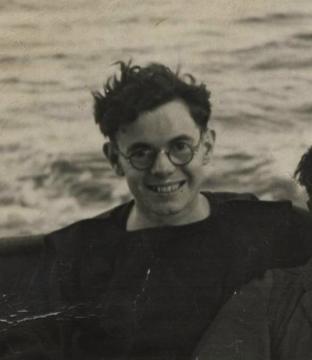 George recalls: ‘We did one convoy from Greenock. We were supposed to be going into Murmansk but this was not allowed as on the previous convoy one of our sailors was killed in Murmansk (they were told this happened whilst fighting with a Russian in a pub). As far as I can remember they then went back to Iceland before going back to Russia, where we stayed with three destroyers in the danger area to protect the convoys.’

George’s role was that of deck hand and one time when they were on standby to receive aircraft he says: ‘I came up on the wrong side of the flight deck and had to crawl along the deck on hands and knees holding onto the trip wire as the deck was so icy.’