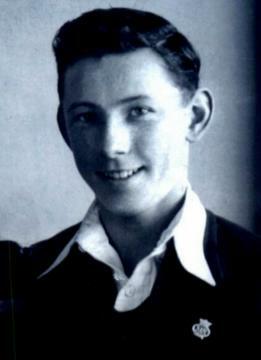 After being bombed out of his home in the Greenock Blitz, George Gray joined the Dutch ship SS Zaanstroom as a merchant seaman, at the age of fifteen and a half.

They supplied the Army with munitions and materials for road making in the small fjords in Iceland. Following this, he served on a series of other merchant ships sailing to the USA and West Indies. George says that, ‘ferocious gales on those convoys (with) deck cargoes, lifeboats and Gunpits lost overboard, helped to keep the U-boats down’.

He then joined M.V. Ninella and proceeded to sail between the U.S.A., the Dutch West Indies, Curacao, etc, with petrol and aviation spirits, and gave support to the forces in West and North Africa as they topped up the Forces transport and planes.

Another trip took him to Montreal to deliver the troop ship M.V.Letitia where she was converted into a hospital ship.

He then signed on the M.V.San Venancio which was bound for the USA, then later took aviation fuel to Cherbourg, ‘dicey work as the Germans were going out as we were going in’.

Convoys JW61, JW62, RA 62 and RA 66 saw the M.V.San Venancio sailing to and from Russia. George’s wartime experiences ended when he was paid off in Greenock on 9 May 1945.