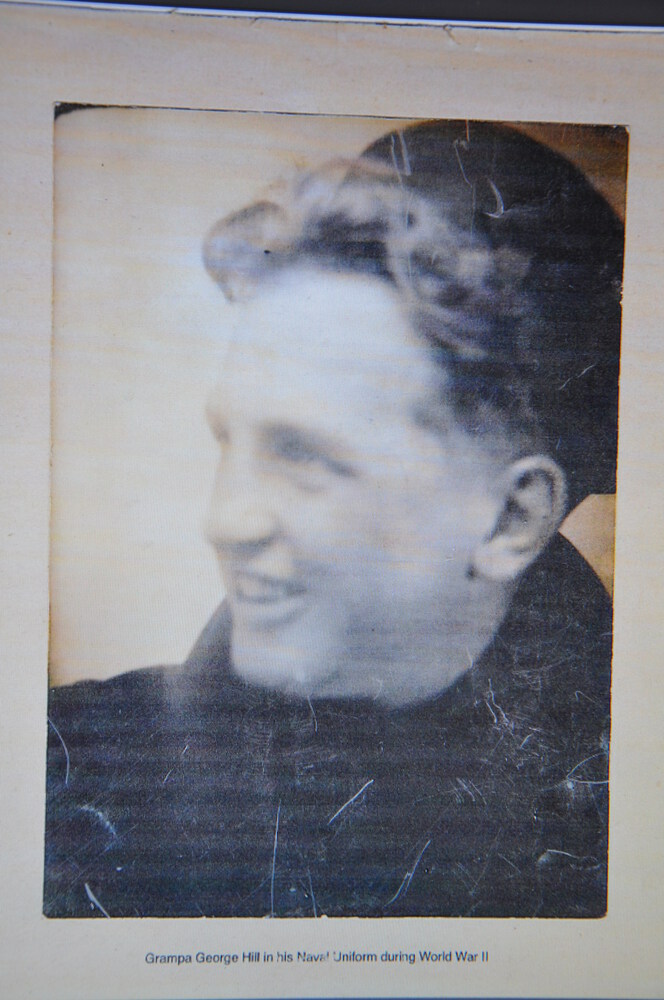 The following is a short story about my Grandfather’s experiences during the latter part of WWII. To tell the story, I have combined extracts from his War Record and Certificate of Service as well as some of his personal accounts. In addition, I was able to use information from HMS Fitzroy’s War Diary and with permission from publishers mentioned below, have adapted extracts from books and utilised photographs to bring to life the story of my Grandfather, HMS Fitzroy and the 21st Escort Group (21EG) as they navigated their way through the troubled waters that lay ahead.

My Grandfather, George Hill, was a painter and decorator during the war and was tasked to paint and maintain decoy airfields in Scotland. His job was a reserved occupation that supported the war effort, so he was exempt conscription. In 1942, restrictions for those working on essential services were relaxed so in early 1943 he enlisted in the Royal Navy (RN). He had been in the Sea Cadets on HMS Unicorn as a youngster and the Royal Navy Volunteer Reserve (RNVR) as a teenager, so it was always the Royal Navy for him.

After joining up in Dundee, he travelled to Portsmouth for his basic training followed by his professional training in communications. He was there for about 4 months before being sent out to the USA to join his ship.

With his ship ready, he made his way to the Bethlehem/Hingham Naval Shipyard in Hingham, Boston, Massachusetts, on the 3rd of October 1943. He had been assigned to HMS Fitzroy K553, a Captain Class Destroyer Escort (DE).

HMS Fitzroy was built and completed, amazingly, in just over 7 weeks. It was part of the lend-lease agreement between the US and the UK in which the Americans built all types of ships and other equipment for loan to the UK during the war.

HMS Fitzroy was commissioned on the 16th of October 1943. Primarily an anti-submarine warfare (ASW) ship. Once commissioned Fitzroy began a staged workup to combat ready status (CRS) and entry into the war.

Not long after becoming fully combat ready the Fitzroy was tasked with her first convoy. On the 27th of March, she sailed on Arctic Convoy JW58 with minesweepers Chamois and Chance and escorted American merchantmen: William S Thayer, John T Holt and Eloy Alfaro from Liverpool up to Iceland. There they joined the main convoy which left Loch Ewe, in the North-West Highlands, on the 28th but on this occasion, she returned to base 2 days later after being relieved by the main escort group. JW58 turned out to be the last Arctic Convoy for several months due to their discontinuation in the summer of 1944 as all naval forces were required for the Normandy landings.

Fitzroy continued her escort duties under Nore Command up until the end of August and by mid-September 1944 had been transferred to Western Approaches Command (WAC) once again. This time she would be part of a new group called the 21st Escort Group (21EG) which included her sister ships, Conn, Redmill, Byron, Deane and Rupert. Their first mission began with a trip through the Minch, a stretch of water between the Inner and Outer Hebrides, to Scapa Flow. They then sailed from Scapa on the 21st of October in company with the escort carriers Nairana, Tracker and Vindex and were soon told that they were bound for Arctic waters.

Arctic Convoy JW61 left Loch Ewe in the early morning of the 21st and met with 21EG en-route northwards for the journey to Murmansk. There were a number of attacks on the convoy but thankfully, there were no losses. The convoy had to fight against terrible weather but managed to reach Murmansk by the 28th of October. The weather for RA61, the return journey, was just as bad but 21EG held out and returned to Belfast on the 9th of November, again without losses.

In the New Year (1945), 21EG had a change of operational area. Several U-boats had been operating in St George’s Channel and the Irish Sea during the latter part of January 1945 and a massive search was set up by several Belfast escort groups.

In March 1945, there were a number of U-Boats operating in Scottish waters around the Hebrides and 21EG was sent to hunt them down. No less than three U-boats had sought sanctuary in the area and in a well concerted group operation, 21EG located and sank each of them in turn sending U-965, U-722 and U-1021 to the bottom. All the ships flew makeshift Jolly Rogers on their return to Belfast to celebrate their triumphs.

21EG’s & HMS Fitzroy’s wartime career came to an end, but not their sea time. All U-boats at sea were told to surrender themselves at British Ports from the 8th of May onwards. On the 7th of May shore leave was cut short and the ships of the Group were ordered to sea. As yet, there had been no news that the war at sea was over and the Group was ordered to proceed to Loch Erriboll off the north-west coast of Scotland, to secure the anchorage and prepare for the surrender of the U-boats.

After a full speed run the Group arrived at Eriboll on the early afternoon on the 8th of May. By this time, an Admiralty signal had let known that the war was over. It may have been George heard of the unofficial surrender on the 7th and thought what a wonderful present it was for his 37th birthday.

On the morning of the 10th of May, with Byron as guard-ship, the first U-Boat hove into sight like a black and white photograph emerging from the developing dish. It was 0940hrs, on a grey and dull morning. Flying the obligatory Black Flag, U-1009 crept slowly into the loch.

Two more surrendered to 21EG on the same day. The third was U-1105 which surrendered to Conn, its commander was Korvettenkapitan Schwartz, the man who tried to sink Redmill. I wonder how the rest of the men on 21EG felt when the man responsible for the deaths of their friends on Redmill surrendered to them in the loch? It seems so unjust and unfortunate as it was the one and only operation that U-1105 had sailed on. Such bad luck for the young sailors who lost their lives so close to the end of the war.

The U-boats continued to come in at regular intervals over the next few days, with boarding parties being put on boats and then escorting them to Loch Alsh for complete disarmament. Interviews of some of the U-Boat captains after they had surrendered found to a man that they were not happy that the war was over and that they were proud to have served their country. They said that they knew nothing about the Holocaust or the atrocities that were committed and dismissed it as Allied propaganda.

By the 18th of May, eighteen U-boats had surrendered in Loch Eriboll to 21ED. It had been a hectic 8 days for them. The next day a large group of U-boats had been spotted by a Canadian EG that had been detached from a returning Russian Convoy. The Canadians escorted the U-boats into Loch Eriboll and turned them over to 21EG and the procedure of surrender was again set in motion.

Nine U-boats surrendered to Fitzroy in Loch Eriboll in May 1945 and a total of 33 were escorted by 21EG to Loch Alsh then to Lisahally and Loch Foyle. George told me that he remembered the strong smell of French perfume that wafted from the U-boats in Loch Eriboll and the young faces of the German sailors who clambered out of the hatches and lined up on deck.

But it wasn’t quite over for HMS Fitzroy. She was put into reserve at Hartlepool to await her time to return to the USA. According to the Naval Historical Branch, Fitzroy joined with HMS Bentinck, a destroyer escort from 3EG and they both sailed from Plymouth for New York on the 5th of December 1945.And that was that, the end of the war for Fitzroy. She and her crew had done their bit for the nation. Sadly, she was sold for scrap only a few months later on the 23rd of May 1946.

For his remaining time in the Royal Navy George was once again back in Portsmouth. He ended his wartime journey where it began and spent the last few months in the city before being released from Service. I thought he may have been on the crew that returned the Fitzroy back to the US but that’s unlikely. Perhaps that was alright with him as he had done a lot of sea time already and probably had excitement enough by then but most of all, he must have been desperate to get home to see his family. In 2014, in his memory, I took delivery of his Arctic Star and added it to the medals he had already earned during the war. Here’s to you, Grampa. I’m a very proud Grandson.