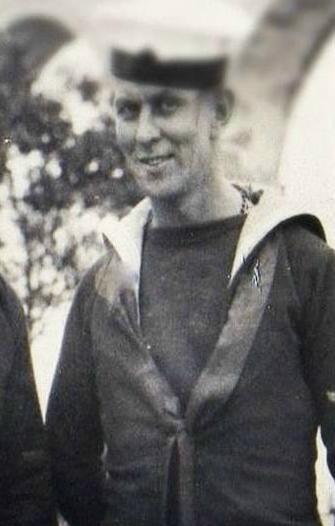 (A tribute by his Grandson – Stuart Evans)

My Granddad, George Hubert Owen Leonard was born in Tumble (Swansea) Wales on 15th May 1912. George eventually settled in the fishing port of Fleetwood Lancashire, where he married My Nan, Norah Cross and they set up home with the in-laws in Custom House Lane, where they raised 3 children George, Veronica and my mother Norah.

He worked as a Fisherman (Deck Hand) sailing out of Fleetwood until in 1939, when aged 27, he answered the call for all fishermen to join the war effort and volunteered for war service with the Royal Naval Patrol Service. He was called up for service by the Combined Recruiting Centre (Naval Section) Carlisle St, Preston on Monday 17th May 1940 and signed up as (JX 197251) Seaman Gunner George Hubert Owen Leonard on 4th June 1940 at HMS Europa Lowestoft. After completing his training in Lowestoft at HMS Europa he went to serve as a Sea Gunner on various Mine Sweepers which had been converted from trawlers.

George served on various ships during WW2, including HMT (S) British, Angle, Culverhouse, Beaver, Colonsay and St Angelo. N.B *Some of these ships names were difficult to read on his war record due to being hand written so may not be 100% accurate. George served on The Russian Arctic Convoys, The Mediterranean campaign including Malta and Sicily and was at the evacuation of Normandy, although which ships he was on at the times of these campaigns I am not sure. He never liked talking about the darker side of his war experiences and always tended to regale us with humorous tales of high jinks and adventure that seemed to get exaggerated more every time he told them, including a tale that involved Christmas, a bottle of rum, a rowing boat and a Swan!

I know he experienced being on a ship that was torpedoed and sunk at least once during his war campaign and tragically he had to hold his best pal in his arms as he died. He always spoke highly of the help that the Salvation Army gave during this period. He claimed to have shot down a few German aircraft during his time at sea, behind what he called the (pom pom) guns, including a Dornier. During his time on HMT Angle he was injured after being thrown violently to the deck during a heavy storm and sustained, what is described on a certificate of wounds and hurts as, ‘traumatic effusion into left knee joint’.

Amongst decorations he received were War Chevrons, Ribbon 39-43, Star (AFO 5056/43) and the Silver Cross, however he was reluctant to talk about medals and didn’t particularly agree with being awarded them and tended to shy away from that side of things, like a lot of the real heroes, saying, “I was just doing my duty”!

Post war George returned to Fleetwood and the fishing industry and mainly worked dockside but due to suffering ill health including convalescing after breaking his hip due to a motorbike accident he had to retire early. He kept himself busy with tending his pride and Joy, his garden and green house and did occasional part time jobs but his main pleasure in later life apart from doing his pools coupon and the odd betting slip was being a fantastic fun grandfather to 9 grandchildren.

Granddad was taken from us far too early at the age of 71 on 13th August 1986 and would have been embarrassed about the campaign to have a medal issued for his part in the Russian Arctic Convoys but that was the kind of man he was and like many of the veterans just got on with their duty and showed the inimitable bulldog spirit.

I wish he was still around and not just so I could ask him for more information on his experiences during the Arctic convoys and other campaigns but alas I only had the pleasure of him being a part of my life for 23 years, well physically anyway.