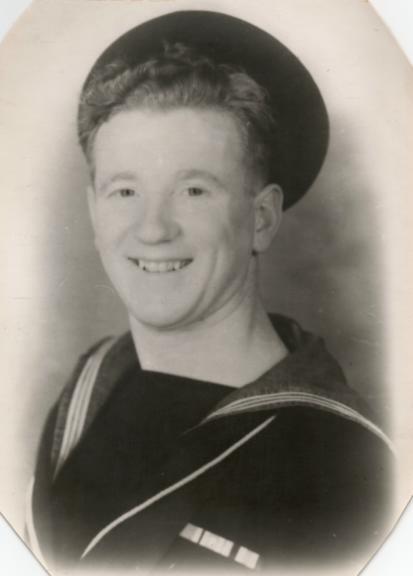 George Robinson was born in County Durham and was called up into the Royal Navy while working in a coal-mine. He started his service at HMS Raleigh on 16th July 1941 and Drake from 23rd September 1941 before joining the minesweeper HMS Halcyon on 12th December.

He stayed with Halcyon throughout the war on escort duty mainly on the Arctic convoys beginning with PQ17. He was also on minesweeping duties off Normandy prior to the D-Day landings where Halcyon was lead minesweeper.

Born at Easington Lane near Sunderland on Christmas Day, 1921, George grew up in that mining village and was working at Eppleton Colliery when he was called up to join the Royal Navy in July 1941. He had only been working at the colliery since May 1941. His previous employment was at Barrow in Furness but this ended when his place of work was bombed by the Germans. The colliery manager told George ‘If you’d let me know earlier we could have got you out of it’. George replied ‘No, I want to be away’.

George started at HMS Raleigh on 16th July 1941 and remained there until 22nd September.

‘I was at Torpoint in East Cornwall. I did basic training including land and sea skills. I did gun drills and then volunteered for ‘ack-ack’ guns. I then went to Breakwater Fort in Plymouth to do anti-aircraft gun training. I passed my gunnery exams.’

‘I then went to HMS Drake on 23rd September 1941 until 11th December. We heard that the Petty officers mess had got bombed and there were lots of people killed. We were sent out with working parties to clear up after bombing raids. We found wills and other papers from various offices lying around which we put to one side. We salvaged wood, removing it to stop fires spreading.’

George then joined the minesweeper HMS Halcyon on 12th December 1941 and was assigned to stay there until 6th May 1945. Then he went to shore bases – Pembroke then Drake then Eaglet then Drake again for final discharge from the Navy.

George’s first mission was Operation Anklet which was to support a Commando raid on the Lofoten Islands.

‘Sailing from Harwich to Scapa via the Irish Sea was terrible as I was sick as a dog and I was not alone as lots of us were sea-sick.’

George had his 20th birthday the day before the Commandos landed on the Islands which was 06:00 on Boxing Day. The commandos were picked up again after the raiding force was attacked by a German seaplane that bombed the cruiser Arethusa. The Navy managed to capture an Enigma coding machine on this mission. The fleet were back in Scapa in 1st January 1942.

The rest of George’s time on active service was mainly on the Russian Convoys and started with PQ17 which left Scapa Flow on 23rd June 1942. They escorted a ship to Hvalfjord then left Reykjavik on the 26th June.

‘Our duties at first revolved around keeping the Halyards & decks clear of ice after calling down for hot water for the hose pipes. We were told the importance of clearing the ice off the deck as the weight of the ice could capsize the ship’.

The PQ17 convoy was attacked by aircraft and U-boats from 1st July. Two ships were badly damaged.

‘We had to sink them as they were too near Norway and we were frightened in case the Germans got them as they had weapons, tanks & planes etc. We fired at them at the waterline to let the water in so they would sink. The ships had been abandoned.’

On the 4th July after a report that the German battleship Tirpitz* had been seen, the convoy was told to scatter leaving the merchant ships without an escort.

‘The U-boats & torpedo boats had a field day on the merchant ships. We had 2 British submarines with us as they thought that they might have a chance to sink the Tirpitz but when we scattered, they “sank & disappeared”.

Halcyon was ordered to sail with HMS Palomares and headed for the shelter of the island of Novaya Zemlya.

‘Novaya Zemlya was where they used to sink the obsolete submarines and ships which were full of oil and one ship sank which had been loaded with oil so the water was full of oil. We did some minesweeping there to keep our hands in. You could see ships masts sticking out of the water where they had been sunk. When we were in Novaya Zemlya the Samuel Chase came in. All we could see through the mist was the superstructure & we thought it was the Tirpitz. We heard later that the Tirpitz had just been moving from one place to another but the admiralty said it was on its way to the convoy.’

Other ships arrived in Novaya Zemlya and then on the 7th July, they set off for Archangel.

‘On the way to Archangel we shot down an enemy plane. The Salamander & Britomart came out to meet us and sent a signal congratulating us on our small arms fire. Our reply was “The Junkers are in season”. One of the Russian trawlers brought a part of the aircraft and presented it to the captain – Lt. Commander Corbet-Singleton.’

‘From Archangel, we were sent out to pick up any survivors from damaged & sunk ships but we couldn’t see anything because of the mist. We had to keep testing the guns on account of the freezing weather. Eventually, a group of Laskars** sitting on a raft made of oil drums attached to a frame, heard our guns and fired off a revolver. We heard them, got them on board and accommodated them in hammocks.’

George remembers some of the crew saying that the bunks were ruined afterwards as the men had been covered in oil.

‘Laskars were the people who worked below deck in the boiler rooms. “They didn’t have desk jobs! They would be returned to another ship at some point”.’

‘In Archangel, we went into the houses where the people lived and the houses were just made of wood from the trees. They showed us photographs of their families. They would say “Ya, nye paneemyo”, which meant “I don’t understand” and “Dobray Den”, which was their “Good Day”.

‘The Russian families were very pleased to see us but they were concerned about the police walking around with rifles with bayonets attached. These included “lasses” who patrolled around the villages keeping order.’

‘When the Cossacks were going to the front, they used to sing a song “The Song of the Plains”. They were just kids. One poor old woman showed us a photograph of her son on a horse.’

‘They had no food. When we chucked mouldy bread overboard, they would be standing with long poles with a hook on the end, fishing it out of the water.’

‘We got our chef to make some bread for us and it was that heavy we called it “depth charge sinkers”. This was a weight attatched to mines to stop them from moving around. We once went to the KG5 (King George V) battleship and got some bread off them.’

‘On our way back to England we lost our navigation and nearly ended up in Norway. The compass had gone wrong. The cruiser HMS London which was on a raiding mission got its eyes on us and put us right by swinging the compass, going round in circles to get the compass right. The problem had been caused by a metal fire extinguisher in the wheelhouse becoming magnetised and causing the compass to be 14 degrees out.’

‘We took over from a destroyer and towed a Frigate to the Island of Dogs. We also picked up a Polish submarine which was almost in Norway and towed it back to England’.

‘We heard that the Samuel Chase was sunk on its return journey off Bear Island. It was a merchant ship. I saw a TV programme once which showed when it was built & launched.’

Other memories – “Iceland”. We once went ashore in Sedijfjord to march a prisoner to jail for stealing a big bottle of rum. He would be taken back to England somewhere. He had shared the rum around with other sailors.’

* Tirpitz -Following convoy PQ16 when five ships had been sunk by the Germans. A German Admiral Raeder was able to secure Hitler’s permission to transfer heavy units, including Tirpitz, to Norway.

These ships were in place by January 1942 and the british Admiralty knew that they could expect an attack on PQ17. Admiral of the Fleet, Sir Dudley Pound, with this fear in mind, indicated to Tovey that he would scatter PQ17 if German heavy units appeared.

** Laskar – a sailor or militiaman from the Indian Subcontinent or other countries east of the Cape of Good Hope, employed on European ships. The term was given by sailors to the men who did the menial jobs on ships, below deck.