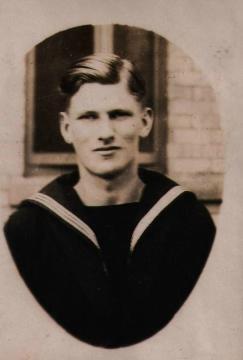 Information and photos by Glanville Hart. Edited by Leona Thomas

After initial training he was posted to HMS Edinburgh, which was based at the time in Scapa Flow. His first patrols were in the Denmark Strait. By Christmas 1941 he was stationed around the Kola Peninsula and was escorting convoys en-route to Murmansk (PQ6 and QP4).

Glanville recalls: “The cold was beyond belief and we had to chip the ice off the deck every morning.”

In March 1942 HMS Edinburgh completed two more convoy trips (PQ 13 and QP9). She then returned to the area to carry out another convoy patrol in late April 1942 (QP11) but on the way back to the UK, the ship was torpedoed by a German submarine (U456). The cruiser’s stern was blown off but she tried to return to Murmansk, escorted by two British ships (HMS Foresight and HMS Forester).

Three German vessels were ordered to seek out and attack the crippled Edinburgh. She opened up with some spirited salvos and managed to hit the Schoemann and caused so much damage that it was eventually abandoned and sank. However, one of the torpedoes had hit and effectively cut HMS Edinburgh in two.

Orders were given to abandon her and she was finally sunk by a torpedo from HMS Foresight. 57 crewmen were lost, but Glanville was rescued by a nearby trawler and transported to Murmansk, where he spent a few months ashore.

Glanville remembers: “My only possession (apart from my uniform) was a simple wooden spoon, which I used to eat the meagre rations provided by the Russians. This spoon now takes pride of place in my display cabinet.”

Following his return to the UK after spending four months effectively stranded in Murmansk, Glanville was sent to HMS King Alfred for officer commissioning. He eventually left as a sub-lieutenant, had further training in Troon, Scotland, and was appointed in charge of a Landing Craft. Glanville commanded his craft (LCT1138) as it landed on Gold Beach on the first wave of D-Day.

Post-war Glanville spent 30 years in the Royal Naval Reserve, retiring at the rank of Captain. He is now based very much inland in Guilsborough, Northamptonshire, where he is actively involved in village life.