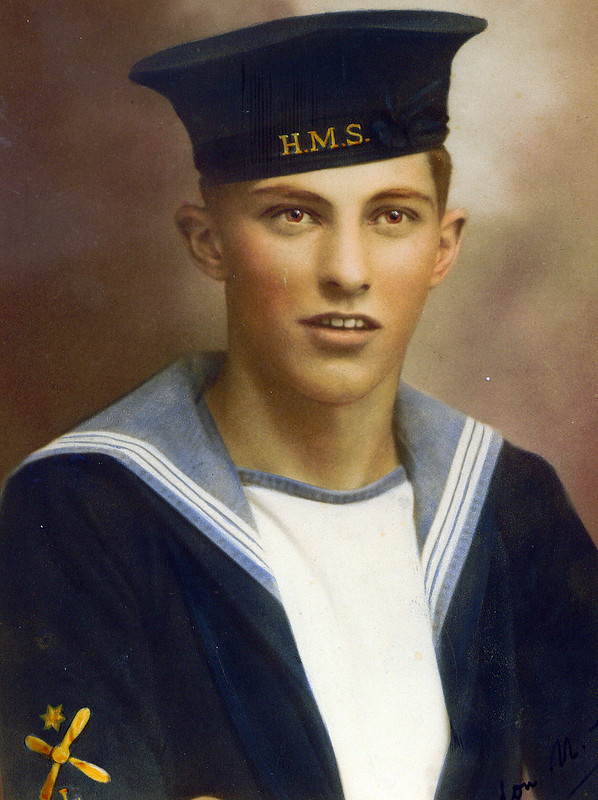 Gordon Norris Wigley (often known as ‘Wig’) signed up on 20 July 1942 – 4 days after his eighteenth birthday. He first went to Collingwood, where he spent three months of basic training thus becoming an Ordinary Seaman. He then moved to HMS Gosling, the FAA training establishment near Warrington in Cheshire. He spent a month here. After that Royal Naval Artificer Training Establishmen (RNATE) Daedalus for five months and became an Air Fitter. He then had further training stints at HMS Daedalus, HMS Daedalus II and HMS Ringtail (the Royal Naval Air Station in Lancashire). On 6 June 1944 he was moved to HMS Waxwing, the FAA Trainsit Camp in Dumfermline in Scotland. On 22 June 1944 he was posted at sea to serve on HMS Campania in Squadron 813 as a mechanic. During his service Dad was called ‘Wig’, as can be seen on the back of his squadron jacket.

He served on HMS Campania for seven months, escorting the Arctic convoys and engaged in anti-submarine work. He recorded the number of probable and certain kills on the reverse of a photo of the Campania. One of these kills would have been the German submarine U-365 which was hit by the Campania’s Swordfish aircraft – whilst escorting Arctic Convoy RA-62. Convoy RA-62 left Kola Inlet on 10 December 1944 and arrived in Loch Ewe on 19 December 1944. He was on the following convoys also; JW60/RA60, and JW61A/RA61A.

Dad never talked about his time in the war apart from telling us that we didn’t know what cold was. He died on 2 March 2010.