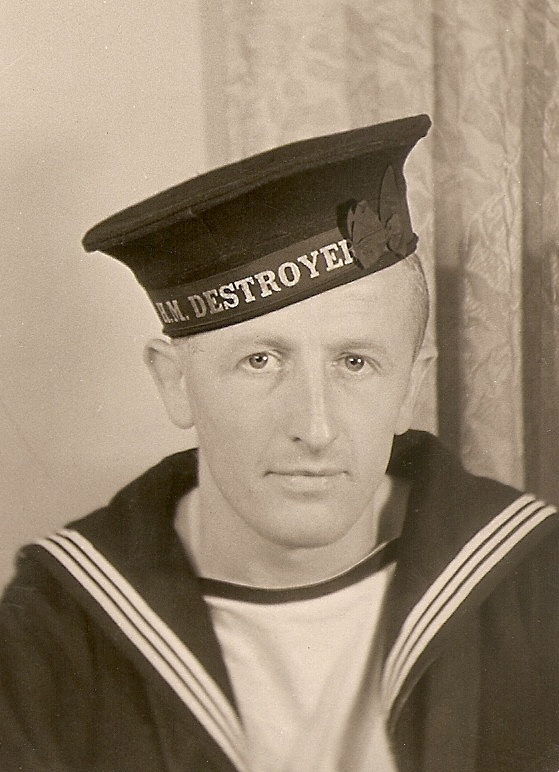 Our father Goronwy Owen was born in October 1913 in South Wales, and at the age of 27 signed up with the Royal Navy in October 1940.

After initial training at HMS Raleigh in Plymouth, he was deployed to HMS Escapade and stayed on there from April 1941 through to July 1942.

Although details are sketchy, it seems he was shore based from August to November 1942, and was then assigned to HMS Anson in November 1942, taking part in Atlantic convoy protection duties right through to July 1944. During this time, he somehow managed to set aside the time to get married to our mother Mabel in February 1944.

After leaving HMS Anson he spent time at HMS Pembroke, HMS Valkyrie, HMS Golden Hind in the UK and Australia and was finally discharged in July 1946 at HMS Pembroke.

When the war was over he went back to his career as a school teacher. After moving around the country a few times in different posts, in the late 1950’s he became the Headmaster of Kineton Junior & Infants School in Warwickshire where he lived village life happily educating the next generations until he passed away in 2002 aged 88.

Unfortunately he spoke very little about his time in the Navy, but in 1991 with the invaluable help of his son in law David Sims (at the time a Master at Arms in the Navy) he managed to secure the Russian Star Medal which our family now proudly holds.

None of us can begin to imagine what it must have been like in the cold North Atlantic on those ships, in constant peril, and never knowing if you were going to make it back home. We’re very proud of him.