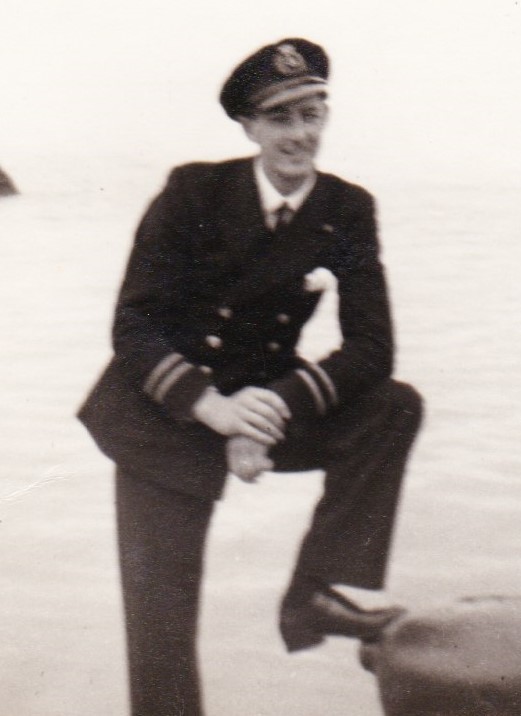 My Dad, Terry, was born in Charlton, South East London and later moved to Plumstead, South East London. He preferred to spend his time on the Woolwich Ferry rather than at school and as soon as he could he left school and he followed in his father’s footsteps and joined the Merchant Navy as an Engineer apprentice with the General Steam Navigation Company.

While serving on the Starling, in May 1940, she was bombed in the Bay of Biscay while en route to Gibraltar. He was not in the engine room at the time, but on the gun platform with seven crew members when the bomb hit, he lost a shoe and was deafened in his right ear but was the only person out of 8 alive. The engine room was damaged and there were fires on the aft deck, the Captain ordered the ship to be abandoned and all surviving crew left in two lifeboats. After a while the Captain asked for volunteers, but all crew returned to the ship and put out the fires and basic repairs were done to a hole just below the water line. A rescue tug towed them into Gibraltar and after a week of repairs the Starling returned to the UK picking up British Embassy staff from Nantes as France had fallen to Germany.

Before joining the SS Zaafaran, a Rescue Ship, on 30 December 1940 he and my Mum, Joan, were engaged while he was on leave. He served on a total of 25 Atlantic Convoys sailing between the UK and Halifax, Nova Scotia, Canada until being part of the ill-fated PQ17.

In July 1942 the Zaafaran sailed from Iceland and then was due to arrive in Archangel, Russia. On 04 July 1942, the Admiralty ordered the Royal Naval escort ships to scatter and the Merchant Navy convoy was abandoned to find their own way to Russian ports. On 05 July, the Zaafaran was attacked by aircraft and one of three bombs hit the ship on the waterline close to the engine room, which was damaged and all lights on the ship went out. He was in the bilges and was covered in oil but not injured, he made a quick exit with other crew members and when arriving on deck found it was level with the sea and he was able to walk off the ship and into a lifeboat. The ship sunk in only 4 minutes with the loss of only one life, an army gunner. Because the sole casualty was not a Merchant Seaman the only mention of the Zaafaran is at the Plymouth Naval Memorial and there is no mention of her at the Merchant Navy Tower Hill Memorial, along with other ships that were sunk during PQ17 this is, I feel, a grave misjustice as she was a Merchant Navy ship and had sailed on many convoys and should have been recognised.

The crew members, along with survivors from other ships they had rescued were, in turn, rescued by her sister ship the SS Zamalek and taken to Archangel. On 14 July, his parents were advised by the G.S.N.C. that the Zaafaran had been sunk but it wasn’t until 17 August that they received a telegram from him saying “safe, well, love Terry”. Terry with 60 other survivors from PQ17 returned to the UK in September 1942 on board the Zamalek as part of QP14.

After arriving back in the UK in September 1942 he was on extended leave until joining the SS Tjaldur on 03 November, 1942 until 01 May, 1943 which carried troops from Aberdeen to the Orkney & Shetland Island and to Iceland.

He was discharged from the Merchant Navy in January 1946 and my Mum and Dad moved in Eastbourne, East Sussex and ran a small hotel that was owned by his Godfather. They later moved to a larger hotel and I arrived in 1949. Both he and my Mum joined the Civil Defence and he spent his spare time playing cricket and football.

They stayed in the hotel business for over 20 years, but in 1970 he returned to the sea and joined Trinity House, serving on the THV Patricia maintaining lightships, light houses and buoys along the English Channel and North Sea. He visited the R.Y. Britannia for several Cocktail Parties and annually met the Duke of Edinburgh when the Patricia was escorting the Britannia for Cowes Week on the Isle of Wight. After retiring from Trinity House, he became a Volunteer Car Driver for the local hospital, taking patients to and from appointments.

The Geach family roots are from Polruan in Cornwall where they were ship builders during the 1700’s. In the mid 1800’s my Great, Great Grandfather moved to Gravesend where he was a Trinity House Pilot. Therefore, throughout my Dad’s life, it was no surprise that the sea never left his blood and we would enjoy annual holidays on the River Thames and the Norfolk Broads and he would take every opportunity for a trip across the Channel. He spent many excursions on the Paddle Steamers sailing from Eastbourne Pier and would travel the country for the chance of a trip on the PS Waverley. He and my Mum spent their 60th Wedding Anniversary on a Mediterranean Cruise. In 2008 I went with them and we cruised to the Norwegian Fjords and then to Spain & Portugal in 2009. He was due to go on a Baltic Cruise in 2010, but passed away, aged 91, just 6 weeks before the cruise. However, according to his wishes to have his ashes scattered at sea, and with my Mum’s blessing, I went on the cruise and his ashes were scattered on 01 July 2010 in the North Sea.

Unfortunately, he never saw his Arctic Star but my Mum received it on his behalf and when she passed away in 2014 all his medals, and those of his father, came to me.

I am very lucky to be going on a cruise in August 2018 and will be visiting Orkney, Tromso and Trondheim all having WW2 connections and places my Dad had sailed to. After the North Cape the cruise calls at Archangel, this will be a very poignant moment for me being 76 years after my Dad was there. From there the ship calls at Murmansk where I hope to visit the Alyosha Monument and also the Murmansk Shipping Company Museum to see the exhibition on Northern Convoys.

Being very proud of my Dad I am pleased to be able to share his life with the Russian Arctic Convoy Museum and would love to hear from anyone who may have had relatives serving on the Zaafaran or any of his other ships.