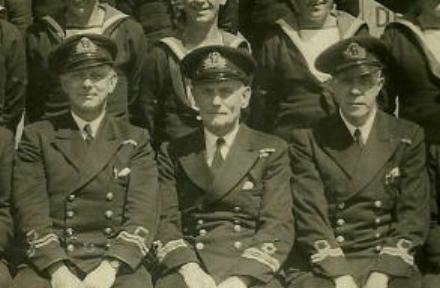 Written by by Fiona Puddy (grand-daughter).

He was born in 1885 in West Hartlepool and served on Mine sweepers at one stage during WW1 and then returned to the merchant navy until 1933 approx.

His role at Aultbea was (I think) related to refueling/supplying the ships before they left in the convoys.

The image on the left was, I believe, taken at Aultbea and I also know that my grandmother stayed at the Poolewe Hotel for a period to be near him.

He used to be driven into Inverness on occassion to meet up with my father (his son, dec 1996) who was stationed at Kinloss as a test pilot.

I have always thought that he was quite old to seek to return to active service in 1940 but I think he missed the sea as well as being patriotic. After all, except for possibly a maximum of 10 years, he had been at sea from the age of 14. He had sailed around Cape Horn in a sailing ship; regularly sailed between Rio and Newfoundland; and been round the Cape of Good Hope.

I actually found a report about his time in minesweepers during WW1 when his minesweeper hit a mine and was blown up off Dover. He actually (according to the report) went down with the minesweeper but eventually surfaced! Very glad he did!