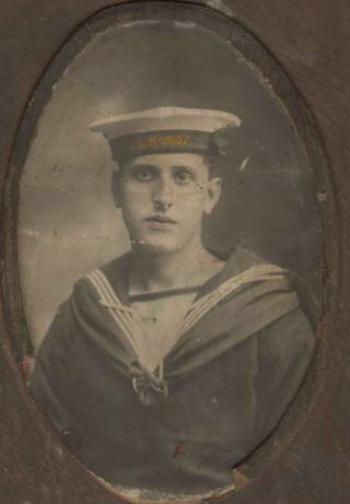 Photo from and written by Sue Black (granddaughter).

This is my grandfather Henry Robert Fox. He was born in 1897 in London. He joined the merchant navy as a 16 year old. His first job was a pantry boy, he was in the merchant navy until he went into the RNVR at 19. After 3 years in the RNVR he went back to the merchant navy. The bulk of his working life was as a steward/cook. After he married he spent a short time shore-based living in America. That life did not work out for him, so he and his family came home and Henry returned to the sea. His last entry in the discharge book was 13th November 1942 when he signed off a ship in Goole.

The next chapter of his life was to sign on the SS Richard Bland as a mess man, we don’t know where or when. He left Loch Ewe to go to Murmansk.

On March 1, 1943 convoy RA53 left Murmansk. On March 5, at 0927, a torpedo struck the SS Richard Bland but failed to sink her. Rapid repairs allowed her to re-join the convoy just in time to fight off an attack by a dozen He-111s. Four bombs just barely missed the Bland but caused no serious damage.

On the night of March 7 a heavy gale with 40 knot winds struck the luckless SS Richard Bland and she lost the bridge steering gear. Emergency steering from the aft platform had to be used. The storm continued for several more days and the SS Richard Bland lost the convoy.

By March 10 the weather improved a little to intermittent snow squalls, poor visibility, and heavy seas. Lookouts reported a periscope astern moments before a torpedo stuck the #4 hold. Before the stern gun could fire on the sub it disappeared into the snow, just as a second torpedo barely missed the stern.

Expecting another attack within minutes, the captain ordered “Abandon Ship!” and two life boats were lowered on the windward side and brought around to the leeward side to pick up the crew. However, the heavy seas and high winds drove both boats, and the eight men in them, into the snow squalls.

There were still 63 men aboard the SS Richard Bland and not enough boats for them all. The captain said that he would remain aboard the SS Bland with any crewmen that cared to remain and radio the escort ships from the convoy for help. He stated “I don’t think she’ll sink unless they put another torpedo into us”. A few minutes later, as the overloaded lifeboats drifted clear of the SS Richard Bland, another torpedo stuck the her under the deck house.

Three torpedoes, ice, and rocks finally proved to be too much for her and the SS Richard Bland broke in half just forward of the deck house. The stern portion sank quickly, but the bow section remained afloat. The already overloaded life boats tried to rescue as many men as they could from the violent, cold seas but many crewmen were lost to the freezing North Atlantic.

The next morning the two lifeboats with the 8 men in them, and one lifeboat with 27 men in it were recovered by the British destroyer HMS Impulsive. Henry Robert Fox was one of the crew who did not survive.