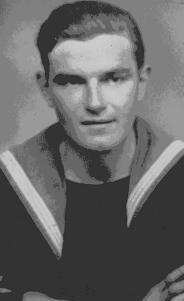 Herbert (known as Bert) Guildford was born in Fulham, London in 1924. He joined the Royal Navy in May 1943, aged nineteen. He started his basic training in HMS Glendower, and from there to HMS Pembroke. He completed his training on HMS Marlborough.

Bert joined HMS Bellona in November 1943 where he spent the next 3 years as a torpedo man. Bellona took part in several Russian convoys to Murmansk and Archangel. She also supported the landings at Normandy (Operation Neptune) and was deployed off Omaha beach to give gunfire support.

HMS Bellona went on to participate on operations off Norway (Operation Mascot), patrolling between Brest and Rochelle to intercept U Boats, to evacuate Biscay ports (Operation Kinetic).

The Russian Convoys were grueling. Bert nearly lost his life on one of them. The crew took turns to break the ice forming on deck of the ship. On one occasion Bert was doing this when a very large wave came over the ship and washed over the railing. He was wearing the watch his wife had given him for his 21st birthday, and the strap caught on the railing. The next wave washed him back on board. How lucky was that! The story only came out many years after the war, when a shipmate visited Bert and his wife. Bert had never told Connie as she had asked Bert not to wear his watch while on board in case he lost it!

Bert married Constance (Connie) on 23 April 1944 while on a 48 hour pass. After Bert was demobbed, he told Connie that he could not take a job indoors. He had trained as an Electrician before being called up. He took a job with London Transport and remained there until he retired.

Like many soldiers, sailors and airmen Bert did not talk much about his war time experiences. But he did talk about the Norwegian people he met when the ship went into Oslo after their Liberation.

Bert also spoke about the beautiful scenery around Scapa Flow. He even wanted to live there after the war, but Connie was not so keen to leave their families. They had 3 daughters and 6 grandchildren.

Bert was a member of the North Russian Club until he died in 1999.