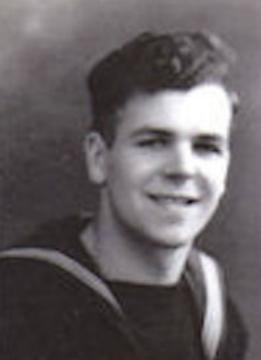 The following is an extract from the auto-biography of Herbert Sydney Roberts who served as a Telegraphist in the Royal Navy during WWII and went on to serve in the Merchant Navy after the war.

“We all three joined Virago when it arrived in Scapa, after commissioning, from Barrow in Furness during November. Our mess deck was forward and to reach it you walked along the upper deck past a wire cage which housed tons of potatoes, then the toilets on the left and the Wireless office on the right and thence down a steel hatchway and over another hatchway which led to the Asdic compartment.

The ship was overcrowded and with, I believe, a peace time compliment of around 80 personnel, had at this time around 200 on board, so that it was with some apprehension that the three of us had to sling our hammocks athwart ship, instead of the usual lengthways. With the rolling of the ship, we had to get used to our bodies moving up and down, instead of the normal sideways movement. However we did get used to it eventually. It was on November the 29th, that we first went to sea for the purpose of Heavy Artillery trials.

I remember the rolling of the ship and the smell of cordite coming down the voice pipes from the bridge when the 4.7ins guns went off. The Petty Officer Telegraphist, noticed the sweat pouring down my face and said. ‘It’s got you has it’ and I replied ‘No! I feel OK’,(I didn’t realise I was sick .) but thankfully a bucket was placed beside me and I was sick. OH??? I was sick. I have cause to remember this because it was my 19th birthday. After my watch ended, I lay down in the mess and prayed,that we would be back in harbour, which we were, before the day had ended.

On the 12th December we sailed for Russia at a convoy speed of 9½ knots. The thought of suffering seasickness for about 8½ days caused me some considerable anguish at the time, but it wasn’t too bad by learning to laugh at it and saying such things as Roll you B.

It soon became normal to be sick and then get over it and eventually, not to be sick at all. One of our signal ratings never got over it though. He seemed to give up completely and used to lie down on the deck in the mess moaning every time we went to sea. Eventually I believe he was discharged although I don’t really know what happened to him.

We met the Convoy at a place called Hackerary in Iceland. With the outbreak of War all the lights in the UK were turned off and except for shaded lights from the road traffic, at night, the place was in complete darkness so that it was a delightful surprise when we approached Iceland to see a blaze of lights. When we went ashore we saw all the shops lit up. Of course the country was neutral and we were allowed to anchor for a period whilst waiting for the convoy of Merchant ships to arrive.

I suppose from the western approaches and America I don’t know how to describe the conditions on our trips to Russia, but it was mostly a case of action stations at night and stand down in the daytime. The chairs in the Wireless Office were screwed to the floor so it was impossible for them to move away from the desk, but there was nothing strange in the site of one or the other of us hanging on like grim death to the desk with one hand whilst the chair was swung right round and our earphones still staying around our ears with the rolling of the ship. It was also noticeable that the lifeboats were invariably left with great holes in the side due to the battering of the sea.

The bows would go down under the sea and gallons of water would rush along the deck. The ship would then shudder and the bows would reappear and all the time you would hear the drone of the aircraft above, relaying the convoy’s position to the U-Boats ahead. It was not considered worth the effort to fire at the aircraft because the chances of hitting them were not very good considering the height at which they were flying. A rope was invariably fastened along the length of the ship to facilitate passage from one end of the ship to the other. In extremely rough weather it pays to hang on like grim death.

I found this very useful when I had occasion to visit the ship’s Doctor, who was situated aft. It was on the occasion when I had suffered a bad fall over the hatchway in our mess deck, I received a bad cut over one of my eyes and was bleeding profusely. It was not very funny to see the Doctor standing with his legs wide open in order to balance himself against the roll of the ship whilst inserting three stitches in my eyebrow.

It was a little different on Christmas Day though. I had the forenoon (8am till 12 noon) watch and the ship was rolling and pitching like nobody’s business. As mentioned before, the chairs in the Wireless Office were screwed to the deck but this was not the case with the bench seats where we sat for our meals.

The tables however were anchored to the deck so couldn’t move and also had ledges on the edges to stop the meals sliding completely off, so all we had to do normally was to hang on to the table with one hand whilst eating with the other. Unfortunately,the ledges on the table weren’t big enough to counter the pitching and rolling of the ship at the speed we were travelling, when we were carrying out attacks on Scharnhorst and the food just bumped over the edge and toppled to join our poor sick signalman sliding up and down on the deck. If it hadn’t have been so serious it would have been hilarious, and I think because of this, I finally lost all my seasickness. I never was sick again.

26th December. Detached with other Fleet destroyers and joined major Home Fleet units to carry out attacks on SCHARNHORST. After a series of torpedo attacks by HM Destroyers SAVAGE, SCORPION, SAUMAREZ and the Norwegian destroyer STORD, HMS VIRAGO carried out further torpedo attacks at close range with HM Destroyers MUSKETEER, OPPORTUNE and MATCHLESS. The destroyer torpedo attacks and the continuing accurate gunfire by HM Battleship DUKE OF YORK resulted in the destruction of the German Warship.

At around 1130 am on boxing day a message was received from HMS Belfast that Scharnhorst had been sighted. She had been lost due to her superior speed for several hours but for some reason had slowed down so that the fleet were able to catch up with her. Scharnhorst was sunk at around 1945 that evening. There were only 36 survivers from a crew of 1986.

30th December, HMS HARDY, a Destroyer Flotilla Leader, was torpedoed. At 0346 hours U-957 fired two Gnats (German Nautical Acoustical Torpedo) at the escorts of the convoy JW-56B and heard two detonations, which were claimed by U-957 as hits on two destroyers, but they were end- of- run detonations. At 03.57, U-278 fired a Gnat, which struck HMS Hardy. Virago was ordered to go alongside to pick up survivors. Hardy had been seriously damaged.

At 04.20 hours, U-957 fired a spread of three FAT (German torpedoes which circulated an area looking for targets) at two Corvettes, which laid stopped, which would have been the destroyer HMS Virago rescuing survivors from the torpedoed Destroyer HMS Hardy.

It was a difficult task for each ship, rising and falling with the tide and the crew of the Hardy had to make sure that Hardy was higher than Virago when they jumped or they would leap to certain death as the two ships collided. At times there was several feet difference.

During this rescue, Virago came in collision with HMS Hardy whilst attempting to go alongside, causing damage to Virago’s bows and Virago returned to Murmansk escorted by Opportune for repairs. We must have spent a week in Murmansk for repairs by Russian women who fitted wooden bows which always leaked afterwards for we always seemed to have about 3 inches of water floating about in our mess deck. Hardy had been seriously damaged and had later, to be torpedoed, by HMS Venus.