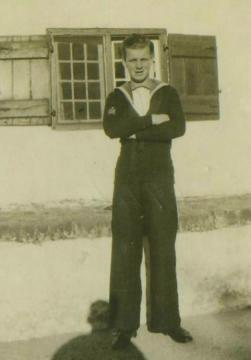 John (Jack) Anderson Sleigh joined the Royal Navy aged 18 in January 1943. From December 1943 until August 1944 was on HMS Anson with the home fleet at Scapa Flow.

Says Jack: ‘We (on HMS Anson) were with the Home Fleet providing distant cover. We were guarding the convoys and provided cover for them between Greenland and Iceland. At other times we patrolled between the Norway coast and the convoys. In November 1944 we heard a buzz that the Tirpitz might be coming out and we looked forward to finding her, but thank goodness! – it was just as well we didn’t for she was a formidable vessel!

We provided the escort force for the aircraft carriers – on board were the planes that were to try to attack the Tirpitz. By then so much damage had been inflicted on the Tirpitz that she had to get back to Germany for repairs. As she neared Tromso she came within flying distance of the land-based planes – Hurricane bombers from Lossiemouth – which hit her with their huge bombs to penetrate the ship’s heavy armour.

She turned turtle and we heard afterwards that knocking had been heard on her hull for some time and some German sailors were rescued through the hull. We had to stay there (north of Bear Island) till the weather improved and we could move down the Norway coast to attack. As we went down the Norway coast there were no signs of any German aircraft. I was sent up to the bridge to answer the phone and I counted in excess of 60 vessels, mainly British. The weather could be very rough, even on a huge battleship we suffered damage on the upper deck from the waves.