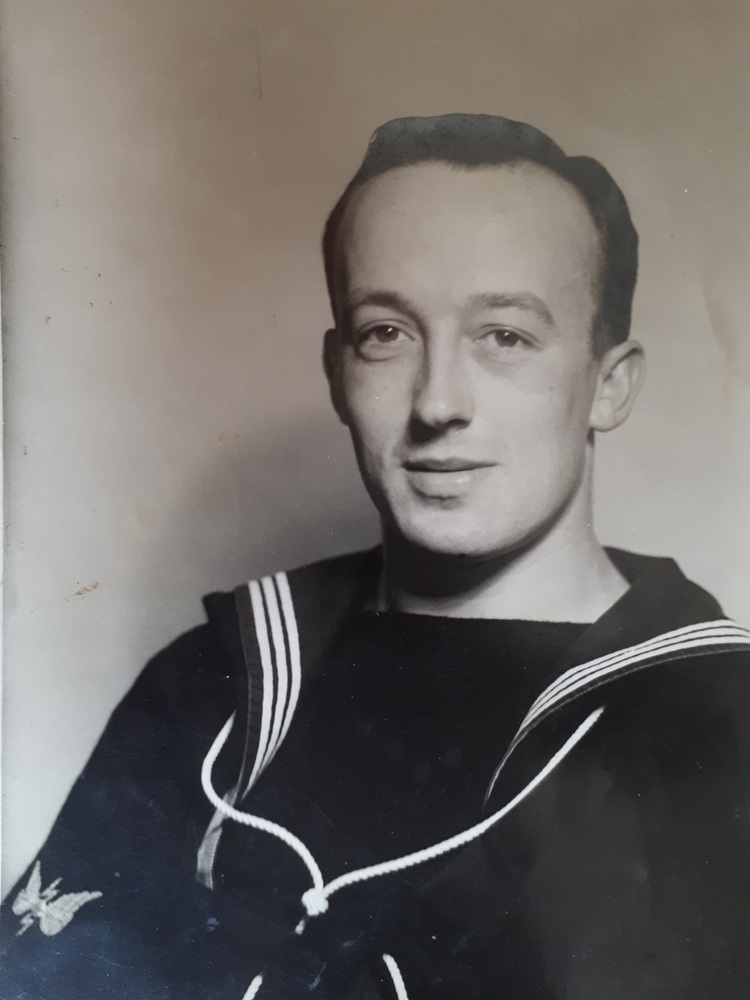 Jack Press (1917-1999) was the radio operator on the flower-class corvette HMS La Malouine during PQ17. During this time he kept a personal diary. His son, David, has very kindly allowed us to reproduce the diary here. The text below is his own transcript of the document, but the original can be viewed by clicking the download link. A question mark signifies uncertainty around the spelling of a word in the original source.

Derry. Slipped at 09:00 and oiled at Moville. Lough Foyle very pretty in the morning sun. The last sight of the British Isles we will have for some time. Left Moville 1400, bound for Iceland and then Russia. In company with AA ships Palomares & Pozarica & corvettes, Poppy, Lotus, & Dianella. Weather fine, sea smooth.

Anchored in Seidisfiord to await rest of escort and convoy. Town on water’s edge very picturesque against background of snow capped towering hills streaked with mountain streams & waterfalls. Weather not too cold. “Sunbathed” at midnight.

Sun On patrol midnight till 0800. A bit misty. Took mail ashore at 1700. Icelanders don’t appear to be very friendly – I suppose we have invaded them anyway. London, Manchester & destroyers arriving.

Mon 29th Midnight till 1100 on patrol again. Clocks back to GMT – did a 5 hour morning watch. W???ed alongside Fury (?). Skipper aboard London for conference. 1400 left for Russia steering N.N.E.

Aircraft still shadowing & apparently ???ing U-boats. Picked up fish after dropping depth charges. At action stations 1000; 1400; 1600; 1800. Shaken up by our own depth charges, dropped while at half speed. In 4” magazine & thought ship had been hit by ???? D/cs 1800. 6 torpedo bombers attack, dropped tin fish, but unsuccessful we claimed one plane shot down, a Heinkel. Picked up rubber dinghy

Sat. 4th 0230 torpedo bomber nipped in out of cloud [in header 1200 – 74 degree 46 minute north & 27 degree 40 minute East] & sunk 1 ship. Hardly a shot was fired. Aircraft shadowing during forenoon. Action stations in afternoon. 1630 25 torpedo bombers launched attack. Saw squadron leader approach from rear of convoy. He went right through, turned and dropped his torpedoes, his undercarriage ablaze. Finally washed in sea. Waves attacked from all angles. 3 were deffinitely (sic) shot down, but few could have returned to their base. 2 ships were sunk.

Today we reach the northern limit, beyond 77 degree N. Ice floes to the North of us. Lotus went back to pick up survivors. Increased speed to 14 knots & left Lord Middleton Rescue ship behind.

During middle 3 DR reported to the south ???120degree

German wireless announce that their “glorious” Luftwaffe dispersed a convoy to Archangel & 19 ships sunk by aircraft, 9 by U-boats. They are pursuing the remainder!!!

Wed 8th Still misty – no signs of enemy. Promised 3 Russian destroyers & Citaline (?) air escort. Afternoon till midnight visibility less than 30 yards & in ice field. We are out of the frying pan & into the fire. Tension worse than U-Boat or aircraft attack.

Thursday 9th Middlewatch. Mist cleared – found ourselves in middle of ice field and half convoy missing. Attempting to round up ships. Clear blue sky – sun shining brightly. I can see large block of ice on starboard side, about 25 yards away. These last 12 hours or more have been quite terrifying. We have been going dead slow ahead, astern, stopping, hard to starboard, hard to port. I have felt ice scraping the ships sides. Lumps of ice have come in board. Made me think of Titanic.

0330 Picked up 23 survivors of U.S. M/S John Witherspoon torpedoed by U-boat on 5/7. U-Boat let crew take to boats & asked if they had sufficient food & water & directed them to the nearest land – Novaya Zemlya. 3 yanks mess with us. Two have bad feet due to exposure. Turned in 0700. Only 2 M/S with us & sweepers with rest. Have afternoon watch. Weather fine. Shadowed by enemy aircraft. If only mist would come down again.

Have first watch. 2150 Action stations. Attack by dive bombers in waves of 5. U.S. M/S Hoosier (Black Eagle) had near miss. Crew abandoned ship. Steam valves must have burst. We went alongside and took off loot. Enemy aircraft still in offing (?). U-Boat on horizon. M/S sunk by our gunfire, and the Lotus who had picked up survivors.

Friday 10th 0015 Action stations (Secured only a few minutes ago). Waves of dive bombers attacking convoy which is now ahead. We engage at full speed ahead. Bomb just missed us & Lotus. In 4” magazine, my action station every bomb sounds very near. Remaining M/S hit (near miss?) & abandoned.

0220 Secure. All that remains with us, Palomares, Pozarica, Lotus, Poppy, Lord Middleton and rescue ships. We did our best. Messages for fighter protection had been sent, but no answer. Planes can only be defeated by planes. Pozarica estimates she shot down 13. More must have been hit. After action friendly plane approached.

Sat 11th 0400 Morning watch. Not far to go now. We should get in without further mishap. Approaching River Dvina. Coastline covered with dense pine forest. Drop anchor outside river entrance. Await pilot boat. 1500 Proceed up river. All the buildings on either side are made of wood. Riverside very primitive looking. No docks – banks built up with wood. Pass a few Russian ships. Women form part of crew. Water is of a dirty brown colour. Streams of logs floating by.

1700 Go alongside at Maimaksa (named after Maisky) I have first dog(?). Quay one mass of logs. After supper go on jetty to barter chocolate andn cigarettes for roubles with the kiddies. 10 roubles a bar of pussers(?) “ky” (cocoa) 15 roubles 20 cigarettes. I amass about 50 roubles. Learn from yankee (been here since June) much better price in Archangel. Decide to hang on to my chocolate.

We brought in 406 survivors. Dianella had also brought some in previously.

These Russians seem to be starving, though they don’t look too bad. Beg for food and ravenously eat gash from dinner. Have afternoon & first watch. Close down 2230

Walk around settlement with Frank. Roads & houses made of wood. Go through barracks. Soldiers (mixed) playing net ball. Army sings as it marches. Not spontaneous & carefree like our Tommies singing jazzy tunes, but it seems to organised. Songs are martial, patriotic & stirring. One sings about a line & the rest join in & in no half hearted manner at that. The girls seem happier than the men. Also tougher and keener. None of the army or navy are dressed or carry themselves very smartly. Every other soldier seems to be an officer. The girls are fairly smart in their skirts & jumpers & forage caps.

The children pester us all the time for chocolate & cigarettes. We learn to say “nierte” (?) Freely distribute ships biscuits which the kids enjoy. Smoking isn’t allowed except in shelter arrangements which have sanded floors.

Pass by “Creche” & wave to babies who are just being turned in by nurses. This seems to be the best building in the settlement & has a stretch of grass fenced off. There are many types of races here. However quite a number of girls are English looking & dressed fairly smartly at that & not bad looking. We meet Vera, & carry on an animated “conversation” she in Russian, we in English.

We see two girls at a window & after making quite sure by the sign language go inside the dwelling & join them in the “cantino”. Room very bare. Table by window. Divan or bed against one wall with highly coloured cushions. They fetch in “chairs” for us (just plain four legged stools). Book about Stalin & revolution on table – even little children recognise & know names of Stalin & leaders. Leave for ship about 11p.m.

Red watch get leave to Archangel. In evening walk around settlement again with o/sign Robinson. Go to cinema. Tons of music in the film. Story of good against evil. Burning at stakes & sword fights. Lights come on every quarter hour when the change the reels. No ventilation or very little. Air hot, oppressive & had horsey odour. Stuck it through 3 reels & came out. Liberty men back from Archangel by ferry at about 2400. Didn’t seem to go much on the place. Couldn’t get much to eat or drink. Place stunk & various complaints of road in bad repair & planks hitting one in the face. Everyone came back with more roubles than when they left.

Ship under sailing orders. Leave cancelled. I was looking forward to going to Archangel. Apparently it wasn’t too bad. Govt(?) concerts and dances at International Club & some lads managed to get big eats. 2200 to sea with Lotus & Poppy to pick up survivors & ships in Novaya Zemyla (sic)