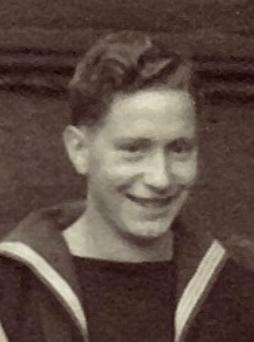 In April 1942 Jack enlisted and spent his initial training at HMS Ganges and Pembroke. In July 1942 he started serving on the destroyer HMS Milne.

His ship became part of the Fighting Escort for Russian Convoy PQ18 and the return Convoy QP14.

In 1942, HMS Milne then deployed with Flotilla for Fleet screening and the Atlantic with major ships with passage to Gibraltar and part of the screen for allied landings in North Africa (Operation TORCH).

In December 1942 the ship then detached (with HMS Meteor) to support mercantile convoy ONS 154 which was under U-Boat attack. They drove off night attacks and rescued survivors from 3 sunk mercantile vessels.

In February 1943, HMS Milne was then deployed as part of an escort for Russian convoy JW53 to Murmansk during appalling weather conditions which returned in March 1943 escorting Convoy RA53. Jack’s ship was then deployed to Plymouth Command for the interception of blockade runners and convoy escort and returned to support the Atlantic convoys in April.

In July 1943, HMS Milne deployed with Home Fleet destroyers as a screen for Battleships and Cruisers in diversionary operations off Norway during planned landings in Sicily.

Jack then went on to serve on HMS Violet (a Corvette) from December 1943 – 1946. During this time the ship sailed for Gibraltar, sank U-641 in the North Atlantic, and was in convoys to & from Aden, Bombay, Hormuz, Colombo. Chittagong, Calcutta,Madras, Vizagpanam, Karachi and were in Oman, Colombo. Madagascar.

When Jack’s Mother died in May 1945, Jack was not allowed home leave.

He married Joyce Bennett in Leeds in February 1946 and formally left HMS Violet on 28th February. He then spent some time at HMS Pembroke and was demobbed in May 1946.