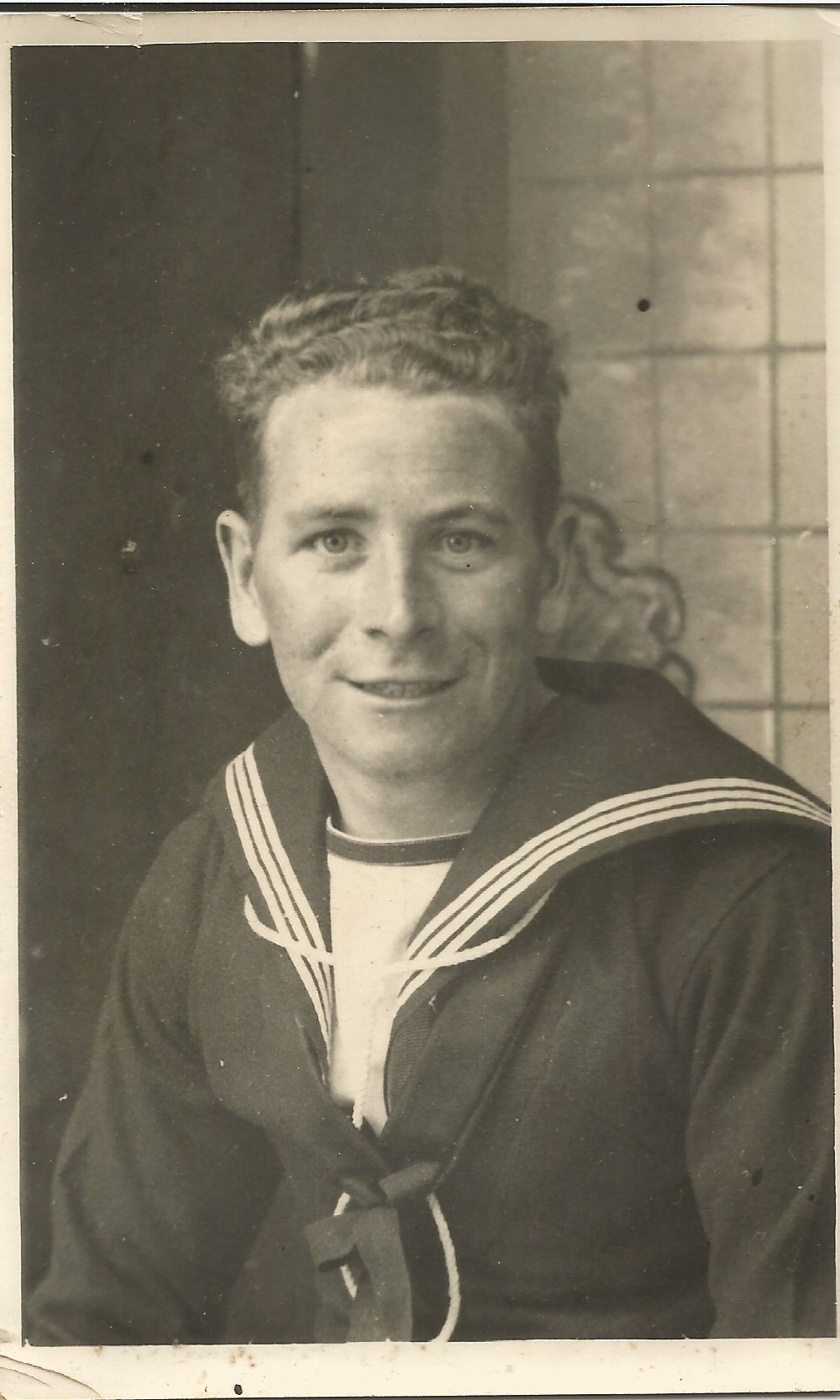 James Buchanan Cameron McDougall (04.12.1916 – 30-11-2005) was born and grew up in Dalmuir on the north bank of the River Clyde. He was called up to the Royal Navy in June of 1940 and, after basic training and special training for the engine room branch, sailed on a passenger liner to Halifax, Nova Scotia, to pick up “HMS Bradford” (former “USS McClanahan”), one of the four-stack destroyers Britain got from the USA in return for military bases on British possessions off the east coast of America.

“Bradford” was based in Londonderry and from there she sailed west to escort convoys of merchant ships coming from the USA. It was soon discovered, however, that the ship was in need of a major overhaul. As this was going to take a considerable amount of time the ship’s company returned to barracks in Devonport. From there Stoker McDougall (Official No. 108889) was assigned tp the Flower Class corvette “HMS Bergamot” which was still building at Harland & Wolff in Belfast. While waiting for the ship to be completed he and the rest of the company were involved in fire-fighting duties during the bombing of Belfast.

Upon completion in May of 1941 “HMS Bergamot” (K 189) sailed first of all for Tobermory on the Isle of Mull where the company went through a two-week training course where they learned about the duties of an escort and how to find and attack u-boats.

In the spring of 1942 K 189 was part of the escort to a convoy to Liverpool. From there she sailed to South Shields where she was given a major refit, including a strengthening of the bow. The men now knew where they were going next!

“Bergamot” and three other corvettes plus a few destroyers made up the ocean escort of PQ 18 which sailed from Loch Ewe on September 3, 1942. From September 13 (Stoker McDougall’s 2nd wedding anniversary) the convoy was subjected to continual air and u-boat attacks. The biggest threat was from the torpedo-carrying aircraft. “Bergamot” was stationed on the starboard side of the convoy, pretty far forward. When he was on watch my dad was in one of the two boiler rooms or in the engine room. When he was off-duty and the ship was at action stations he was helping to keep one of the guns supplied with ammunition.

The convoy arrived in Archangelsk on September 21 but it was not until November 17 that “Bergamot” left the Kola Inlet with convoy QP 15, reaching Loch Ewe on November 30.

On February 15 “Bergamot” was on her way back to Russia with convoy JW 53. The weather was always bad on the Russian Convoys but JW 53 probably experienced the worst of all. This also made it difficult for the enemy with the result that no ships were lost.

On February 27 the convoy reached Murmansk and this time it was only 2 days until “Bergamot” was on her way back to Loch Ewe with convoy RA 53 which left Kola on March 1. This convoy was scattered by storms and U-boats succeeded in sinking three of the merchant vessels. The convoy reached Loch Ewe on March 14.

For “Bergamot” there followed more North Atlantic convoys until In June 1943 she was part of the escort to KMS 18B, destined for the Mediterranean and the invasion of Sicily (Operation Husky). “Bergamot” (K 189) spent the rest of the war in the Mediterranean, escorting convoys to Alexandria, to Gibraltar, to Port Said etc.

My dad was over 70 before I interviewed him about his experiences in the war. I wish now I had asked him more. With regard to the convoys to Russia all he talked about was the height of the waves – no mention of the low temperatures or the poor accommodation on board a Flower Class corvette.