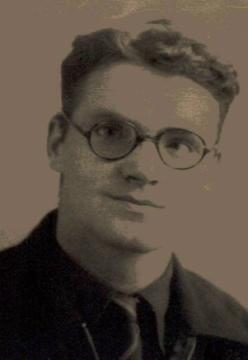 My Grandad, James Crombie Anderson was killed on the HMS Mahratta when he was only 24.

He left two surviving daughters Helen (my Mum) and Vivienne, four grandchildren and six great grandchildren. My son Finn recently did WWII as a project at school and was proud to speak about his three great grandfathers who all served in the war, the last of which died last year.

My mum was only three when Jimmy died but she remembers that he was tall and had red hair. His wife, my Nan, Alice ‘Bobby’ Crombie Anderson, always maintained that he was the love of her life and that it was the shock of hearing of his death that had turned her hair white.

I have attached a photo of him, the only one I have. It is good to think that these brave men are remembered somewhere.

My Mum is Cornish but Jimmy is originally from Edinburgh and served in the Merchant Navy before joining the Royal Navy and the HMS Mahratta.