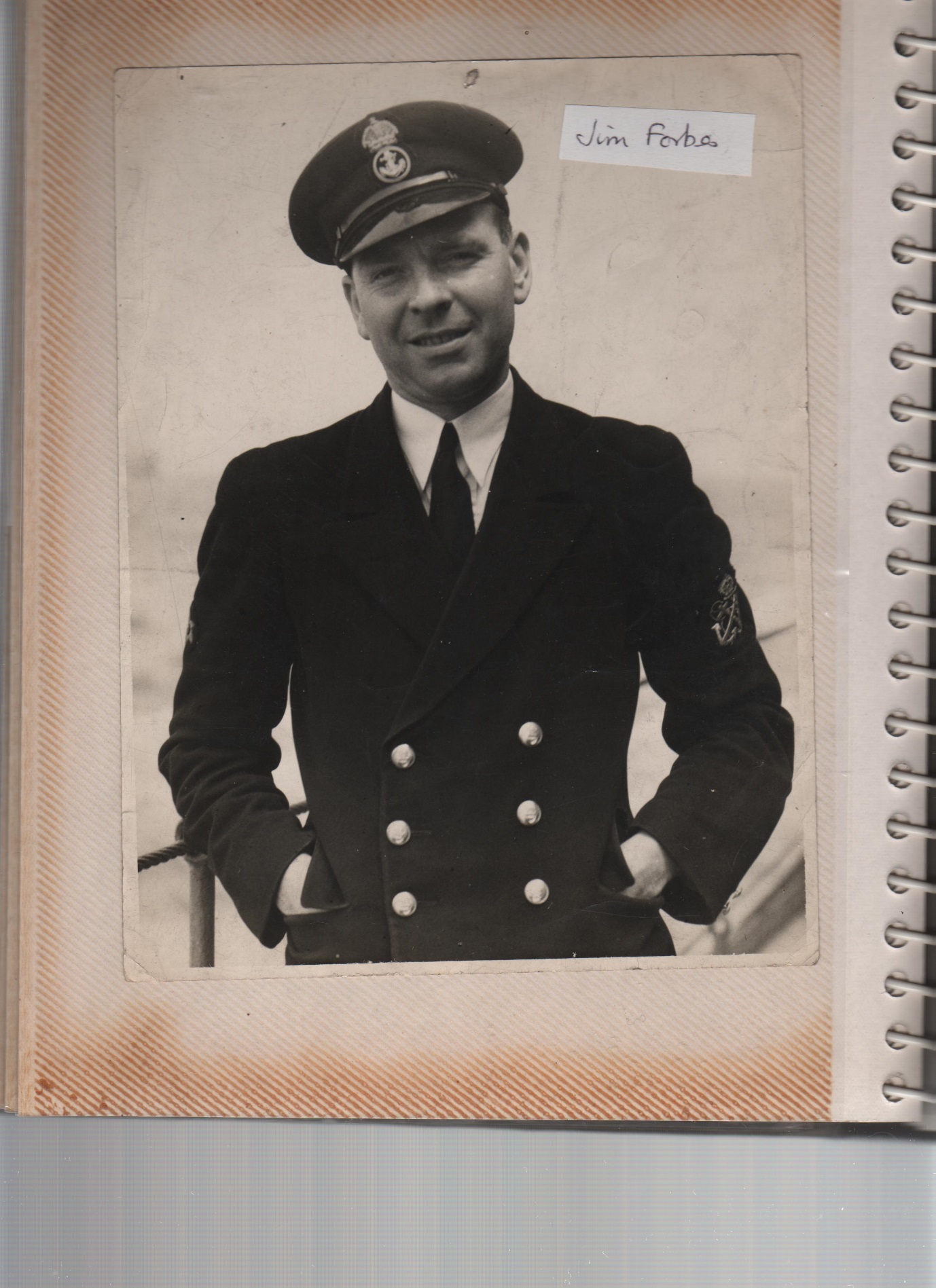 James Edwin Mollard Forbes was born 30 October 1912. On enlisting, he did his training at HMS Royal Arthur (Skegness Butlins!) in Oct -Nov 1940, then was based at Portsmouth while HMS Scylla was being built . He had done evening classes in bookkeeping, and was assigned to stores aboard  HMS Victory during 1941, working as a leading Store Assistant, according to his service record.

In early 1942 Scylla underwent sea trials, and then was involved in Russian convoy PQ18, which Dad has written about in detail, then ‘Operation Torch’ , the invasion of French North Africa; On Jan 1st 1943 she intercepted the German Rhakotis in the Bay of Biscay.

A few words from Dad’s diary, remembered one year afterwards : —

“The gathering dusk, the ship in flames, the two ‘fish’ that we threw at her, one hitting her right amidships, the two boats she lowered and which we left to their fate 200 miles from land in a very rough sea”

HMS Scylla escorted a  Russian convoy in Feb 1943 , When Dad earned his ‘Bluenose’ certificate, pictured in the photograph.

Dad was aboard  until June 1943, when he was transferred to HMS Maidstone, and heading for hotter climates, the Mediteranean, the Far East, and Fremantle . Maidstone led the British fleet into Hong Kong Harbour for the Japanese surrender, then picked up POWs from the Philippines, for repatriation in the UK.

Jim just made it home for Christmas 1945, and was released to shore April 1946. He returned to his sport of cycling, and won many cups for Hill climbing. On retirement  at the age of 70 he fulfilled his plan of cycling ‘End to End’, which he completed in 2 sections. He was a founder member of Withington Wheelers Cycling club, and was always a lynchpin of the club,  which is thriving today,  with Jim’s son Russell taking on Jim’s role.

He also took the family to Butlin’s, including Skegness – for holidays this time!

Jim died on 15th Feb 2000, 3 weeks after Nan, our Mum. The club awards an annual  memorial trophy for each of them.

HMS Scylla was flagship of the destroyer escort of PQ 18 carrying Rear Admiral Burnett. 40 ships and HMS Scylla left Loch Ewe on 2nd September 1942 to join the British fleet at Scapa Flow. They immediately ran into stormy weather. My Dad had joined Scylla straight from training, when the ship was newly commissioned in June. Jim found that he suffered from seasickness!

Note:
The previous convoy – PQ17, which had departed on 26th June, suffered horrendous losses and became known as “The Convoy to Hell”.
Out of 36 ships , only 11 arrived in North Russia ; 23 were sunk.
After the disaster of PQ17, convoys were halted until 1st Sept, when PQ18 assembled at Loch Ewe.

3rd Sep: “The whole of this day (Thursday) passed miserably, hardly seem to have been conscious at all. I have never felt so bad in all my life. The sea gave the impression of taking mighty punches at us and the ship would shudder in her stride.”

After the sinking of the The Mary Luckenbach:

“It is now 10pm and the day’s events seem unreal. Many men — friends and enemies alike — are now dead on the ocean bottom and for what – I don’t know!”

HMS Scylla joined the British Fleet at Scapa Flow in the Orkneys on Sep 21st 1942 to join Convoy PQ18 of merchant ships sailing to North Russia with essential supplies for the Russian people.

On 16th Sep Scylla and the destroyer escort joined the home-bound convoy QP 14, including survivors from PQ17, returning from Archangel.

“It seems a great pity that having made this arduous journey we will not be permitted a glimpse of Archangel – the convoy’s ultimate destination – and I am really sorry.”
The returning convoy came under heavy attack from U-boats and lost 6 ships.
Admiral Burnett sent Scylla, (carrying survivors) and the aircraft carrier Avenger (whose aircrews were exhausted) on ahead.
Burnett transferred his flag – and himself (via a ‘bosun’s chair’ as filmed and shown in Pathe news ) to HMS Milne.

“We eventually dropped anchor in Scapa at 0930 Thursday 24th and I think I just about ‘made it’. Even lying down I could feel myself growing less conscious every second. Still it’s all over now and the ‘goods’ are delivered”.

Jim to Nan Thurs 25.9.42
“I suppose you were very glad to receive my letter yesterday & to know everything was OK. I suppose also you will have heard the wireless report regarding our first action. As a result of the broadcast we are now permitted to tell of our part in this latest Russian convoy……. We accounted for 39 planes-certainties & many more that wouldn’t make home. We also ‘bagged’ 6 U – boats, certain, 6 probable. The blue T.S. (Jim’s action station) were credited with 3 planes.
At one time we were attacked by 42 torpedo – carrying Heikells – 2 each, 84 torpedoes being in the water together but by skilful manoeuvring we evaded 7 in our path, and on another occasion leapt forward at full throttle as one neared our side. the acceleration leaving it to pass just behind our stern.
Altogether we were closed up at action stations 7 days less an hour and a half, starting on Sunday & ‘securing’ at 12/30pm the following Sunday. I don’t need say we were tired, but when you realise how much depends on it, it isn’t too hard to stay awake….”

Jim, my Dad wrote a 50 page account of his experiences during this convoy, which was considered a success – out of 40 ships, 27 arrived at their destination and 13 were sunk.
His words during the convoy are from his account, typed later by my Mum, Nan.