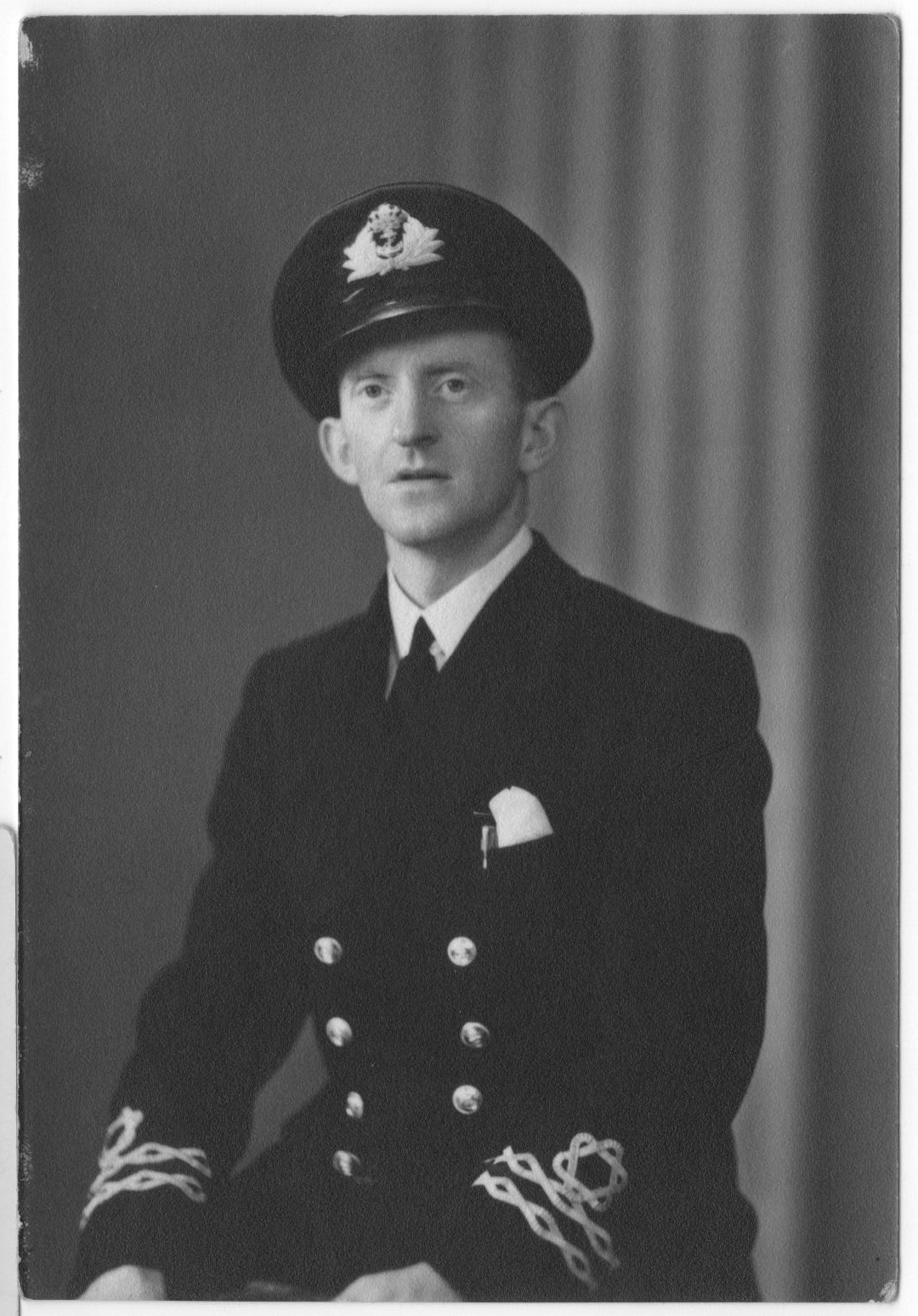 (written by his daughter, Lisbeth Thoms)

James McIntyre Thoms was born on 5 May 1912 in Dundee. He left school aged 16 and was apprenticed, for five years, to Jute Industries, Caldrum Works, to train in mechanical engineering and was subsequently retained for a further year as a journeyman. He left in 1934 to go to sea with the New Zealand Shipping Co Ltd, London as a marine engineer. In March 1942, being a merchant seaman, he was assigned to the T.124X group (in which merchant seamen served alongside Royal Navy personnel) and signed agreements to come under Royal Navy jurisdiction with a temporary commission (Royal Naval Reserve) as Lieutenant Engineer and subsequently served on three auxiliary war vessels. Via HMS Mersey (RN shore base, Liverpool) his first ship was HMS Ulster Queen (June ’42 – Jan ’43) joining her company in Belfast and sailing on her with Arctic Convoy PQ18 from Loch Ewe to Archangel returning to Belfast via the Clyde with convoy QP15. Via HMS Mersey and HMS Asbury (US Navy shore base, Rhode Island) his next ship was HMS Slinger (May ’43 – July ’44) an escort aircraft carrier obtained under the US/UK Lend Lease Agreement. Finally he served on HMS Kirriemoor (August ’44 – March ’46), a boom carrier hired (from 1940-46) by the Royal Navy. He had married Helen Bromley in February 1943 in Dundee and after dispersal from war service in April 1946 he secured employment with Barry Ostlere and Shepherd (linoleum manufacturers) in Kirkcaldy. It was there that their only child, a daughter, Lisbeth was born in 1948. Thereafter his employment was as an engineer with Tullis Russel (paper makers) in Fife; International Synthetic Rubber Ltd, Hampshire; Samuel Heap & Son Ltd (textile dyers & finishers), Rochdale; Yorkshire Paper Mills, Barnsley and finally as Chief Engineer with Gestetner Paper Manufacturers, Kilbagie in Clackmannanshire. He retired to Dundee in 1977 but sadly died two years later, aged 67, in November 1979 from lung cancer as a result of a working life spent in boiler and engine rooms. His widow survived him until 2013, aged 95, but knowing in that year he was posthumously awarded the Arctic Star medal.