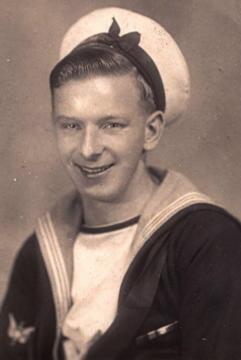 James joined the Royal Navy in June 1943. He trained as a telegraphist at HMS Scotia in Ayr and in HMS Valkiri in the Isle of Man. He served on HMS Duckworth, a Captain’s Class frigate on the American Lease herd project, from early 1944 for a year. James says: ‘Our home port was Belfast. We sailed south to the English Channel searching for U Boats. Our search pattern took in the Bay of Biscay, Eastern Atlantic, Land’s End, the Channel Islands, Western France and Northern Spain.’

‘We sailed for three weeks, then came in for oil for one day. This we did four times (12 weeks) after which we returned to Belfast when half the ship’s company got home leave, the other half shore leave. This we did every three months, alternating home and shore leave, for a whole year.’

Photo: James (3rd from left) with three of his ship mates

‘Our skipper was Captain Mills, who was senior officer of all the escort vessels. We sank seven U Boats – two off Land’s End, one off Lizard Point, one in the Bay of Biscay, one off the Channel Islands, one off the Isle of Man and one in the Irish Sea. We sailed from Loch Ewe for Polyarno on 19th October 1944 and returned to Belfast late November 1944.’

‘After leaving HMS Duckworth in early 1945 I joined HMS Stevenstone in spring 1945. I served on this ship for a whole year, having joined her in St Catherine’s Dock, London. I received the instructions myself on the transmitter. I enjoyed my time in the Royal Navy’.