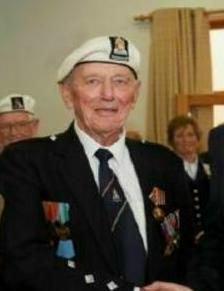 Jock joined the Merchant Navy at the age of sixteen in 1944 and after basic training as a junior ordinary seaman signed on his first ship, a tanker, MV San Venancio. He made a couple of trips on this ship across the Atlantic, loaded with aircraft fuel. His ship joined convoy JW65 to Murmansk and he recalls the extreme cold and snow showers:

“The ship’s deck was soon like a skating rink and extreme care had to be taken never to touch metal with bare hands as the skin would have been torn off. The appalling weather did have its benefits in that German U boats and aircraft never made contact with the convoy. The usual packs of U-boats also failed to spot us. Our luck continued until we were approaching Kola Inlet, north of Murmansk, another haunt where the U boats lay in wait.”

“The snow blizzards prevented our carrier-based aircraft from making contact with the enemy and the inevitable happened, the U boats struck. Ahead of us the “Horace Bushnell” was torpedoed then two or three minutes later the “Thomas Donaldson” was also torpedoed. As we lowered our lifeboats a periscope was sighted and all hell broke loose! The guns on the Merchant ships opened up and everyone was shouting and yelling.”

“A corvette dropped depth charges and returned flying the “Sub-sunk” pennant. The noise which followed scared the wits out of me. We all appreciated that as a tanker we would be a prime target. The thought of death didn’t frighten me but I was terrified of being badly burned, losing a limb or my sense. We all experienced the same emotions.”

The ship made a dash for the safety inside the boom which lay ahead. At the same time HMS Lapwing was torpedoed and sank. Says Jock: “Throughout this action the stench of burning metal and screeching as it was torn apart and the screams of the wounded filled the air. We had to steam rapidly away from the scene. I saw men clinging desperately to lifeboats and rafts, many because of the intense cold coupled with sodden clothing were sliding back into the sea.”

The crews of HMS Savage and HMS Allington Castle rescued many from the HMS Lapwing but the loss of life was huge.

Jock and his ship returned on convoy RA66 six weeks later. As they left, HMS Goodall was torpedoed at the entrance to Kola Inlet, again with huge loss of life. The convoy returned to the Clyde on VE Day, 8 May 1945.

Jock, (Chairman of the Russian Arctic Convoy Club, Scotland) and some fellow veterans, made a trip to Murmansk in July 2009 and as Jock says: “The day in Murmansk proved to be one of the most memorable in our lives!”