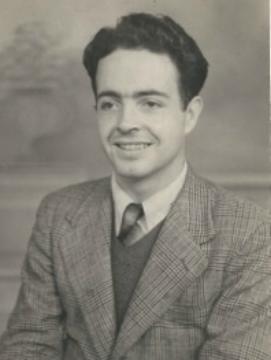 I was brought up in Kilbirnie, Ayrshire, Scotland the second eldest of ten children.

I joined the ship Olynthus on 28th April 1941, as a Steward and sailed to Halifax, Nova Scotia to pick up a convoy as a duty oiler.

Later, I joined the San Ambrosia, on 24th November 1943 and made 2 voyages to Murmansk, Russia, as a duty oiler to the Royal Navy escort ships.

We were issued with thick clothing to protect us from the freezing Arctic temperatures, eating and sleeping fully clothed. With only one hour of daylight, it could become quite depressing so, occasionally, the Captain would send down a bottle of spirits to cheer us up.

On our return voyage from Murmansk, the merchant ship next to us in the convoy was torpedoed. We couldn’t stop to pick up any survivors, as this was left to the escort ships of the Royal Navy.

I later joined the troop ship, Stirling Castle in July 1944, to pick up American troops for the invasion, after which I was discharged.

I came from a musical family and my mother was a semi professional singer. I was awarded a grant to study singing at the Royal Academy of Music for 4 years. I was also fortunate to join the Glyndebourne Opera Company for 7 seasons and travelled with them to the Berlin and Edinburgh Festivals.

After 20 years as a professional singer, I retired and started a delivery business in St Albans, where I worked until I was 83 years old.

In July 2013, I was awarded the Arctic Star medal and my wife and I were honoured to receive an invitation, through the “Not Forgotten Association”, and meet the Princess Royal at a garden party held in the grounds of Buckingham Palace.