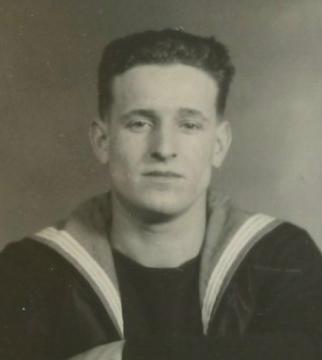 John joined the Royal Navy In December 1942 and started his Navy career as a Stoker on HMS Drake. John was initially posted to the Pacific Theatre of The War where he was stationed in Sydney Australia John enjoyed swimming in the Blue Pacific Ocean and loved his time there. Not confined to ship or barracks (he resided with an Australian family) John could spend his early mornings swimming off the beaches of Sydney. The evenings where to his own leisure. One of John’s main tasks was ferrying senior officers around the Harbour. For most nineteen year olds this would have seemed like paradise but not so for John.

John soon became ‘bored’ with this as his fortnightly wages only lasted a few days,and then he was literally skint. As a result he requested a sea posting so he could be more active and save some money. In September 1943 John was posted to HMS Norfolk and began active service with the Russian Arctic Convoys. Still as a stoker John encountered freezing cold temperatures, mountainous seas, perpetual darkness, 24 hour daylight and like all the servicemen ice covered ships.

John’s ship HMS Norfolk was the first to engage the Scharnhorst on Boxing Day 1943. The Norfolk got a serious blow on The Scharnhorst, crippling it’s command post. The Norfolk took a hit itself and had to let the other ships in the convoy finish the job off. HMS Duke of York sent the ScharnhorstM to the bottom of The Barents Sea. A famous victory for the Royal Navy as The Scharnhorst has been harassing the convoys for some time and was a formidable enemy. Only 28 crew members where saved and one of John’s mementos is a document with all their signatures.

John served for many more months on the Russian Convoys and docked at Archangel and Murmansk. John stated the local Russian people where friendly enough but not overly grateful of the servicemen’s efforts. John returned to service later in the war to The Pacific arena and docked in Japan, Singapore, Australia and New Zealand.

After discharge in May 1946 John took up painting and decorating. He later married Georgina and had three Children, Susan, Alison and John jnr. Unfortunately John died of cancer in November 1998, aged 74 years.

As a child I would love listening to dad recount his tales told with such humbleness and lack of fuss.To dad it was no big deal just something he did at the time. Dad kept photographic and various other records of the Russian Convoys. The photographs helped me get some perspective of the enormous waves he endured. The thick sheets of ice that blanketed the decks of the ships. Dad would tell me one of his jobs was to break the ice off the guns, railings and lifeboats.

The weight was hazardous to the ships safety, too much ice and the ship could capsize. All Arctic Convoy servicemen knew that two minutes in that frozen sea was about as along as the body could endure. Dad told the tale of the sinking of the Scharnhorst and to me he was a true hero. I could only ever hope to match the bravery and spirit he displayed.

The Scharnhorst was a fearsome enemy and had claimed many allied ships / lives. The news given to the crew of The HMS Norfolk by the captain that they where going to engage the Scharnhorst caused many to have need of the toilet. Dad stated that when one of the Scharnhorst’s shells hit The Norfolk it came perilously close to where he was. He also knew that as a stoker and being in the bowels of the ship his survival chances where very slim.