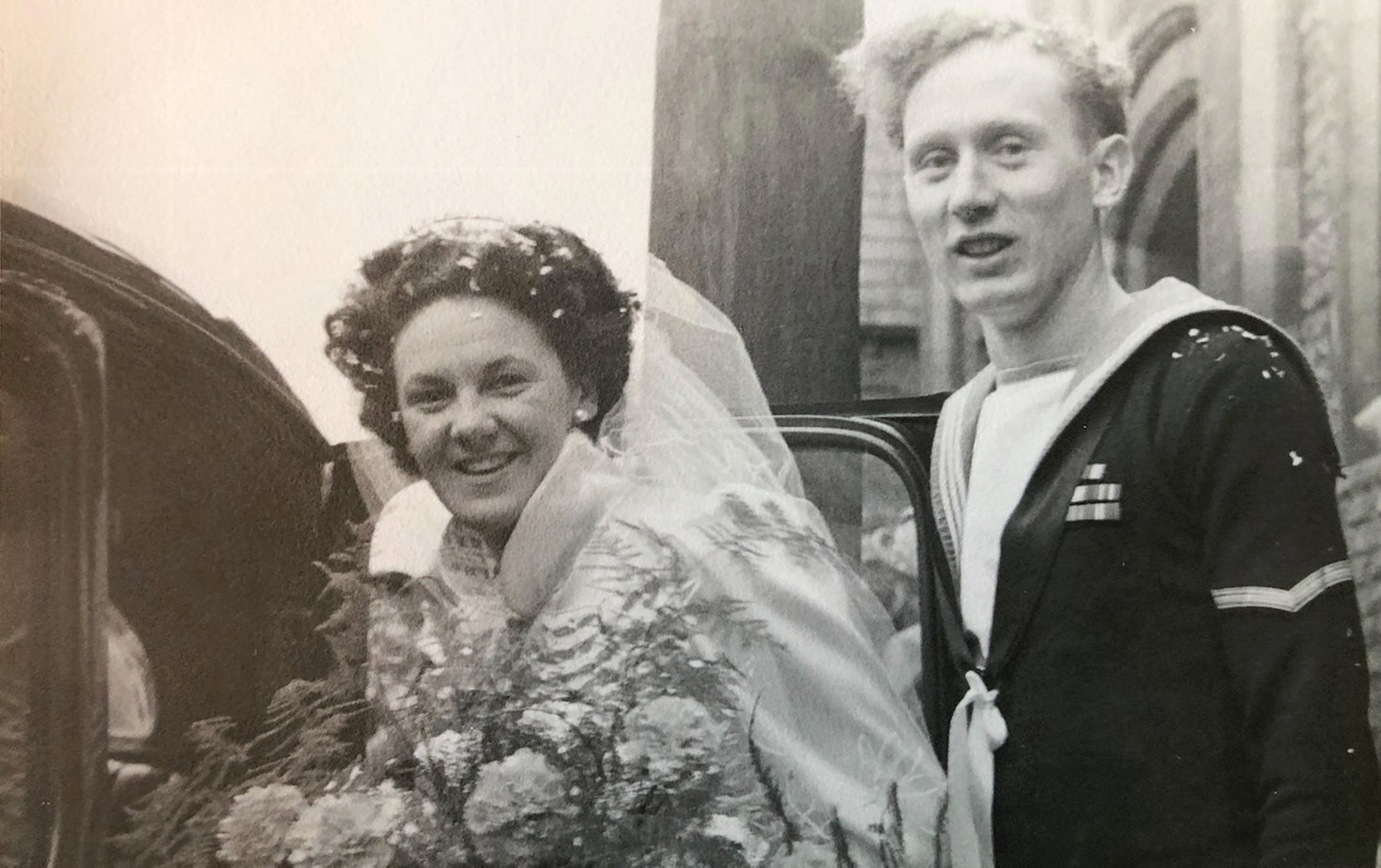 John proudly served in the Royal Navy for over 10 years. During his time he worked on the following ships: HMS White Bear, HMS Wrangler, and HMS Duke of York.

After joining up in 1940, John trained in the Royal Navy as a range finder. “I was only 15 years old when I Joined. I lied about my age to get in, but that was all I wanted to do. My work meant most of my time was up in the ‘Crows Nest’ operating the Inclinometer equipment, which I was trained to do during my early part of the Navy in Rosyth”.

During his time in Rosyth, he met his future wife Jean Hartnell, who served as a CPO in the WREN’s. They fell in love and managed to stay in touch throughout the War. They married in October 1949, John proudly dressed in his Navy Uniform. John now lives in Pontypool, South Wales and still enjoys telling us about his time served in the Royal Navy. For the most part he talks with a smile of the life-long friendships made with fellow sailors, like ‘Pearce’, ‘Pickering’, and then some of who he only remembers by nickname like Jump-a-cross the mad Geordie! He kept in touch with some of them long after the war, but over the years the replies have inevitably all but stopped. Despite his physical frailty he still recalls things from the war and in great detail.

“My most vivid memories are during my time served on the Russian Convoys. We escorted and protected supplies vessels to Murmansk through the frozen arctic. The seas were mountainous, there was hardly any daylight and the temperatures were regularly 40 below freezing. We had to use shovels and picks to remove the snow and ice off the deck before breakfast. There was the constant threat of attack from the Luftwaffe above an U-Boats below. It was described as a ‘frozen hell’.”

“On December 26th 1943 we made up what was called ‘phase 2’ in the battle of North Cape, in pursuit of the Scharnhorst. Under the command of Admiral Bruce Fraser (a man who John revered). We came under fire with some shells landing dangerously close, but we avoided a direct hit. We retaliated firing from a distance of about 10 miles and struck the boiler room. This continued for hours with the Scharnhorst retreating fast. We eventually caught and sunk her later that evening. Whatever survivors were then rescued from the freezing sea’s by HMS Scorpion and transferred to us probably as were had more supplies. They were very pleasant and so happy to be alive. We shared food and drank with them and headed back to Scapa flow. I still have their autographs.”

It was only after the war that John realised how important this day was. “We took out the German’s ‘Lucky’ Scharnhorst, the last boat in her fleet. This opened up a safer passage to Russia and altered the course of the war in our favour.”

Nearing the end of the war John went East and was amongst the first to form part of the Nagasaki and Hiroshima relief effort. “The damage was unbelievable, it was incredible. I will never forget it…”

John had taken photos of the damage and utter devastation which we still have. He described it as walking around a Ghost town, with no atmosphere. “I remember us lifting up pieces of corrugated metal to find whole families sheltering and begging for food..” His role was to try and help repatriate and help them to safety. He became ill whilst fulfilling his role there and ended up spending over 6 weeks in a Japanese hospital. His ship left home without him on board. After recovering he joined an American aircraft carrier that was headed back to the UK. Although we’re still unsure which one this was?

John left the Navy in 1950 and then started work in Llanwern Steelworks. But to this day he still talks very proudly and in vivid detail of his amazing time serving in the Royal Navy. From shaking hands with the Commander of the Duke Of York Sir Guy Russell, (who he described as the perfect gentleman) to all the places he saw. From the frozen seas of the Arctic North to the time spent in the humid Pacific, listing far-off places like Columbo and visiting the ‘Temple of the tooth’, (which he remembers having to remove his boots before entering). He visited places like Sydney, Australia on many occasions and Hobart in Tasmania which he describes as his favourite place on earth.

John was honoured to receive the Arctic star medal in 2013, but said “The only shame is so many men who deserved this medal are no longer with us…”

As a family we are immensely proud of John’s brave dedication and how lucky he was to return home at the end of it to keep these stories alive, so they are never forgotten. Our one and only JC Hughes (RN).