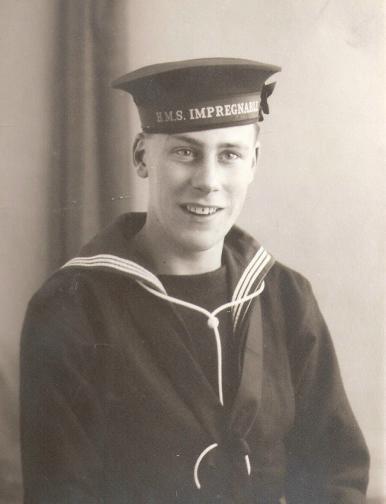 John Edwin Rawlinson (Eddie), my father, was born 10th December 1922 in Shepherds Bush and was 19 years old, working as an Insurance Clerk at Lloyds of London, when he joined the Royal Navy on 9th April 1941 ‘until the end of the present emergency’. His home port was Chatham.

He returned to HMS Pembroke, Chatham, from 22nd November 1944 to 8th January 1945, and on 13th January 1945, whilst on 4 weeks home leave, married Dorothy Gwendoline Carter and they honeymooned in Beer, Devon. He returned to HMS Pembroke, Chatham until 2nd March 1945 to sit Yeoman of Signals exams. On 3rd March 1945 he was posted to HMS Goodall (Eaglet, named after Nelsons Captains at the Battle of Trafalgar), replacing another signalman taking the exam. This was a destroyer escort and American lease-lend ship on Operation ‘Roundel’ Convoy JW66 to Murmansk. The convoy arrived on 25th April 1945 with ‘u’ boats off the Kola Inlet. On Sunday 29th April 1945 at 1927hrs on the return convoy RA66, in the Kola Inlet, 7 miles from Murmansk, HMS Goodall, ‘K479’ was hit by a Gnat Torpedo from U286. The magazine exploded, blowing away the forepart of the vessel, killing the Commander and 102 crew. HMS Honeysuckle took off 13 survivors. Before the night was out the Frigates, Loch Inch, Loch Shin, Cotton and Anguilla attacked and sank U286 in revenge for the sinking of Goodall. Eddie was lost aged 22 years. This was the last Royal Naval Ship to be lost in the European Theatre of War WW2. On 30th April 1945 Hitler committed suicide. Convoy RA66 was to steam unmolested in exemplary order through the Barents and Norwegian Seas and round Cloch Point, heading for the Tail o’ the Bank on VE day 8th May 1945. The war was over.

His wife Dorothy (Maynard) passed peacefully away on 29th July 2014 aged 93 years and 4 mths. Dorothy had also been an instrument fitter on ‘Fairy Swordfish’ aeroplanes during the war at Fairy Aviation and these planes were instrumental in damaging the Bismark (Sheffield carried one aboard and Eddie was aboard when Sheffield was involved in the search)