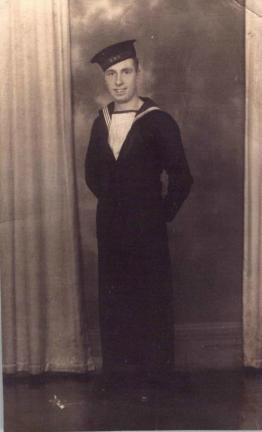 John was born and brought up in Salford qualifying as a cabinet maker and French polisher before volunteering for the navy, aged 19.

In spring 1941 he joined the newly launched HMS Trinidad at Devonport for the Arctic convoys from Scapa Flow to Murmansk via Iceland but also later served on HMS Quality running down to South Africa.

John recalls: “When the Trindad left port we were not told where we were heading but were issued with “Whites” and were hopeful of going somewhere warm. However, when we sailed up past Blackpool we knew the “Whites” wouldn’t be much use.”

“This was the commissioning voyage, she wasn’t commissioned till October 1941 and we actually still had workmen aboard who where put ashore at Scapa Flow. I remember the Murmansk run because I celebrated my 21st birthday on board in 1942.”

“Your sleeping / eating / living area contained twenty places with hammocks above and the tradition was, when celebrating a 21st birthday, that each of the other nineteen men allowed you a sip of their rum ration which combined with your own full ration knocked you out cold. The choice was 3d extra per day or a ration of rum- I always took the rum!”

He also remembers seeing the northern lights night after night ~ but had no camera to record it.

John’s family tells us that he rarely talks about the terrible things that happened. In March 1942, following the sinking of a German destroyer Z26, HMS Trinidad, due to a technical malfunction, torpedoed itself killing 32. She then limped into Murmansk for repair and he remembers her being bombed in May 1942 on the run home with the loss of 63 lives, including 20 survivors of the HMS Edinburgh. He was rescued by HMS Forester.