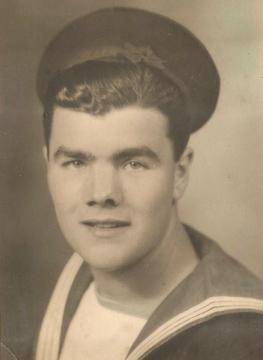 Information and photos from John Allen and his family. Edited by Leona Thomas.

John served as Able Seaman aboard the frigate HMS Bahamas. At the end of November 1944 they sailed from Londonderry to the assembly point at Loch Ewe and joined convoy JW62 with the 20th Escort Group which arrived unscathed at Kola Inlet in Russia on 7th December 1944.

The return convoy RA62 left Kola Inlet on 10th December 1944. On 11th December HMS Cassandra had her bow completely blown away by a torpedo from U-boat U365, with considerable loss of life. More than a third of the ship’s company were killed in the explosion and the survivors prepared to abandon ship.

Realising the sea was too rough to bring another ship alongside, they shored up the forward bulkheads. It was decided to save the Cassandra by towing her stern first.

John told us: “My friend and shipmate, Leading Seaman Alf Rising, secured a heaving line to HMS Cassandra. HMS Cassandra was towed by HMS Bahamas back towards the Kola Inlet for emergency repairs. It remained too rough to take off the wounded en route but medical supplies, including morphine, were sent aboard by means of an overhead line from HMS Tortola. Later the tow was passed over to a Russian tug, which towed her into Kola Inlet. On arrival at Kola Inlet, some survivors stayed in Russia and others took passage aboard the HMS Bahamas back to the UK”.

On 13th December that U-boat – U365, was sunk with loss of all hands by depth charges from two Swordfish aircraft from 813 Squadron aboard HMS Campania.

On 11th December 2004 John was invited to a Service of Reconciliation and Remembrance in Portsmouth concerning the events, which took place 60 years before, where he met several survivors from HMS Cassandra.

Dad passed away on Saturday 7th November, he was 92 years old. We just wanted to say how pleased he was to be recognised for his contribution to the war effort, and in particular, proud of his service aboard the HMS Bahamas on the Russian Convoys. We too are very proud of dad, he was a very kind and lovely man.