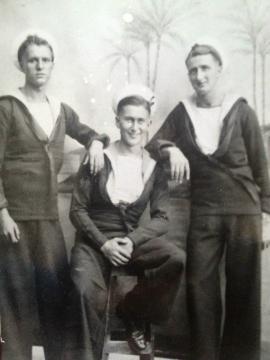 My dad Jules Pierre, born 1921, and died 1992 in Middlesbrough, where he spent much of his life, served in the Royal Navy and as a signalman on the HMS Hyderabad, a corvette in the Flower class. He completed his initial training in Skegness and then transferred to Portsmouth.

Two convoys were experienced by dad. Firstly PQ16, forerunner of the heavily attacked PQ17, however PQ16, to use my father’s words, had almost as bad a bashing.

He also took part in escorting JW 51B to Murmansk. They were attacked by the Hipper and the Lutzow, a pocket battleship and a cruiser. The attack was a direct order from Hitler via Admiral Raeder.

Following the Arctic convoys he served in the Royal Navy in Malta and Egypt, my mother telling the story that him and his friends took a taxi to a nightclub in Cairo and had his wallet pinched.

Following service he worked for companies such as ICI and the Tees and Hartlepool Port Authority. He married my mum Mary in 1953 and remained married until his death. In the early 90s he met up again with those he served. They got together at the Royal Navy club Royal Leamington Spa.

Those attending were George Coxon, Tug Wilson, Brummie Harrison, Tansie Lee, Dally Duncan and Tommy Atkins. They toasted those who had passed on, including Postie Barker, Taffy Davies and Chick Henderson.