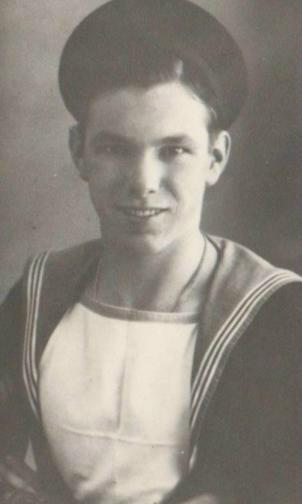 Kenneth was 17 when he was on the Russian Convoys.

This was a particulary important job as all manoeuvres and administrative messages had to be sent by flags or morse light as radio signals could be picked up by the enemy.

“Over the 4 convoys I participated we were lucky for the first 2 convoys as we had no casualties possibly because the atrocious weather conditions were unsuitable for the enemy to attack but our luck ran out on the third convoy, JW 65 when we were atttacked by 6 U-boats and the corvette LAPWING and 2 American merchant ships HORACE BUSHNELL and THOMAS DONALDSON were sunk.”

“On the next convoy 9 U-boats were waiting for us off the entrance to Kola but we managed to avoid them by the subterfuge of sending 4 destroyers firing pyrochtecnics to simulate the convoy by the normal route while we got away through a channel in the minefield which the Russian minesweepers had cleared. The ruse was successful as we got away without any casualties”. Kenneth

Kenneth also served on a number of other ships during his career.

Ken passed away in December 2015