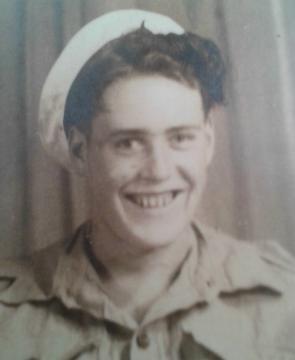 Kenneth Watson, Ken, left Tolworth Central School in Surrey at the age of 14 to work as a butcher’s boy. At the age of 17, while working as a baker’s roundsman, he volunteered for National Service. He was accepted as a Grade 2 recruit because of his flat feet and sent to HMS Bristol for six weeks training. Here, Ken undertook rigorous fitness training after which he was given the option of returning home, joining Combined Operations or signing up to the Royal Navy. Deciding to join the Royal Navy, Ken was transferred to HMS Collingwood and then HMS Victory.

While stationed at HMS Victory Ken helped to lay ASDIC cables down the cliffs at Bembridge on the Isle of Wight, where they supplemented their “canteen messing” rations with rabbits and sea gull eggs they foraged for themselves. Back in Portsmouth, Ken undertook guard duties but after a while he was anxious to go to sea.

Ken joined the aircraft carrier HMS Vindex as an Ordinary Seaman aged 18 on 28th July 1944. On 4th August 1944 Ken departed Greenock on his first convoy mission with HMS Vindex under Captain Bayliss. Ken undertook sentry duties in four-hour watches (except the dog watches, which were two-hour stints, 4-6pm and 6-8pm) and was allocated to P1 pom-poms. In the lead up to the departure of this convoy JW59, Ken can remember practising on the pom-poms against the rocks along the Clyde.

As part of his uniform Ken was kitted out with sea boots and furs to help counteract the cold weather. On board ship, Ken slept in quarters on the port forehead. Here he slept in a hammock, which had to be lashed up and stowed away when not in use. Ken says that he has never slept so well as in that hammock. He was allocated to mess room 13 where they ate meals (the food was sufficient and quite good, often home made split pea soup and bacon knuckle). Here he was served a cup of rum at lunchtime (1200 hours) and played card games.

Convoy JW59 gathered at Scapa Flow. After this the ships journeyed northwards and it was Ken’s job to keep watch (180 degrees observation) and look out for enemy submarines in particular (on one occasion a whale was mistaken for a U-boat). Behind him, on the flight deck, Swordfish aircraft took off and landed. Even in the summer months there were hailstorms and the seas could be heavy. On its arrival in Russian waters the Vindex was anchored outside Murmansk. Ken can remember the crew being given strict instructions to keep themselves to themselves when ashore so as not to upset the locals. He recalls posting a letter at an office on dockside and still wonders to this day how it ever reached home.

Ken returned with Convoy RA59, which departed Murmansk for Greenock on 28th August 1944. Fog and snowstorms were commonplace on the convoys; also Ken remembers witnessing the Northern Lights, which were an amazing sight with their vivid colours but added to the danger as they lit up the sky. During the winter months, the convoys travelled in darkness most of the time.

In total, Ken made four return trips to Murmansk with the convoys (JW/RA 61, JW/RA63 and JW/RA66 too). Ken can remember a Swordfish aircraft from the Vindex crashing into the sea with loss of life, also aircraft crashing into the barriers, coming loose or getting snagged on the wire and tipping up into the sea. There were operational difficulties such as a new torpedo system that did not work, the ship’s anchors proving inadequate at times and the departure of JW63 being delayed because the Vindex’s cables had become twisted. On one occasion Ken found himself volunteering to climb over the side of the ship in a tricky manoeuvre above the sea to secure an Oerlikon gun that had come loose. On 12th October 1944, Ken was promoted to Able Seaman.

When Ken looks back on his service with the convoys, he realises that he was blissfully unaware of some of the dangers because of his youth and inexperience. However, he does remember the Vindex narrowly missing a torpedo after Captain Bayliss took urgent avoiding action. Ken can also remember rescuing British seamen and German personnel from the sea and having to keep them in separate cells when on sentry duty.

Ken’s biggest memory of the convoys is of the severe weather conditions encountered on the return trip in January 1945 when the Vindex found itself in a hurricane. Everything had to be secured down and it became necessary to seal off the fresh air intakes as water came across the decks and onto the catwalks and flight deck. To this day, Ken has memories of the frightening mountainous seas and remains incredulous of how the Vindex managed to come through this great storm despite the heavy swell and extreme angles of tilt. At one point, the ship’s padre invited off-duty personnel to join him at mid-ships for prayer. Within the hour the sea calmed significantly, Ken describing it ‘as if a miracle had happened’.

Just as the Vindex returned to Scapa Flow in May 1945, Ken was informed by the ship’s padre that his mother had died. Ken was duly issued with travel warrants and given permission to return home to Surrey as soon as the carrier docked. For Ken, memories of VE Day are tempered by the loss of his mother.

Ken later returned to HMS Vindex and saw service in the Far East via the Suez Canal, Ceylon and Burma where they faced kamikaze pilots and a torpedo missed the Vindex by a mere 15 yards. Ken was subsequently awarded the Burma Star. The Vindex continued to the Pacific, arriving in Sydney on VJ Day, where he joined in the celebrations with locals. During his time in the Pacific, Ken helped with the restoration of Hong Kong, the repatriation of prisoners-of-war from Hong Kong to Australia and New Zealand, and the shipment of supplies.

In Hong Kong, Ken suffered a tropical abscess, which caused sleeping sickness and required hospitalisation, resulting in his transfer to a different ship as the Vindex had already sailed. Later he was transferred to Kure (Hiroshima), where he witnessed the devastation caused by the atomic bomb. Ken returned to England on HMS Indomitable. In 1947 he was selected for the Guard of Honour when King George VI and his family departed Portsmouth for South Africa.