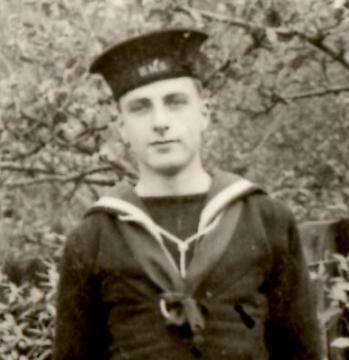 “Except for those who have had the experience, it is almost impossible to understand the feelings of a young man, in his late teens, standing on the deck of a warship in time of conflict. The wind howling, the ship rolling and pitching and the intensity of the extreme cold. Lurking and ever present, the relentless nagging feeling of danger from mines, torpedoes and all the other hazards of the sea and air.

Recently out of school, with complete lack of knowledge of adulthood and then training for ten or twelve weeks. Now on the flagship, a British cruiser, escorting the convoy of merchant vessels plying their wares of transport from America, Scotland and other parts of the world to their destination in the Soviet Union, Murmansk.

Without the loss and determination of the convoy sailors who kept the only supply line open through the Barents Sea, and allowed Russia to hold firm against Germany, perhaps we would all now live in a very different world.

Fate creates curious friendships. Now 60 year later, and with the wearing of the Soviet medal, I genuinely feel that I have a great link with so many people whom I will never meet and whose politics I may never understand. Murmansk, the Artic and the Barents Sea became for me a symbol of the hardship and brutality of war. At other times, when long after the war, the world and events seemed overwhelming, I remembered Murmansk. Many people feel moved to make a pilgrimage to places that signify or try to give meaning to war, or other things of great significance in their lives; for me, it’s Murmansk and she still calls.”

Laurence Biggs saw active service in World War Two in the Royal Navy from 1942 to 1946. He served on the Russian convoys in 1943, became an instructor, served with Special and Coastal Forces. The Reverend Laurence Walter Biggs lived to fulfil his promise made during war and became an ordained minister in the Anglican Church in England and then Australia.

Laurence’s son Mark has written a book about his father’s wartime service. The book is called “Above and Beyond“, and was published in 2014 (second edition 2017). He has kindly allowed us to reproduce the front and back covers here.