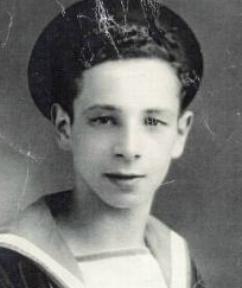 My father Lenny Davies, served on the Honeysuckle from December 15th 1943 and was on-board in the last convoy which sailed into the Clyde on VE day.

This is a short history of my Dad Len Davies, who served during the war with the Royal Navy, this is just some of the information I have found whilst carrying out my research into our family history.

Len was born at Claremont Court in Shrewsbury on the 2nd April 1925, later the family moved to 22 School Close in Longden Coleham, this is where his brothers and sister Bob, Desley and Colin were born. Len attended Coleham Infants/Junior School and then Monkmoor Secondary Modern School in Cherry Orchard, the family moved from Coleham to 16 Racecourse Crescent in 1939, then back to 51 Longden Coleham to take over Mr Brown’s grocery shop in 1943.

When they went to Racecourse Crescent, Len was 14 years old, had left school and started work at “Davies’s The Forge” which was on the side of the Welsh Bridge, this firm refurbished coal fired boilers, and it was heavy and dirty work. Lenny’s Mother was not having this and Dad was instructed to enquire about other jobs and eventually Len went to work at the Sentinel Wagon Works in Harlescott Shrewsbury.

In 1942 the war was in full swing. Len was now 17 and a lot of his mates were joining up in the Navy, Teddy Harris, Billy Hodges, Alan Soden, Harold Hancocks and many more, and he wanted to go too, he lied about his age and volunteered for the navy at the local naval recruiting office on Dogpole, when mother found out she went to the office and soon put a stop to it.

He carried on working at the Sentinel Wagon Works as a fitter on army vehicles, eventually his time came, and he volunteered again, on Mothers birthday 16th February 1943, (now there’s a coincidence for you), he gave his next of kin as his dad Frank Davies.

He soon received his calling up papers and his brother Bob clearly remembers at the age of 14, walking with his Dad and Len up Crowmere Road, over the Castle Walk, past the Prison and over the Dana to the railway station at 6am in the morning to see him off to Chatham.

He was back on HMS Pembroke on 8th June 1945 until 21st August 1945, his navy records state that HMS Honeysuckle then arrived in Sri Lanca where the crewe transferred to a shore base named HMS Mayina they were there from 22nd August to the 17th September 1945. We think this is where the navy assembled preparing for an attack on Japan, perhaps someone can tell us more about this base.

He then joined what appears on his records to be HMS Highphen from 18th September to 23rd November 1945, we cannot find anything out about this ship, the writing is difficult to read, again someone out there may be able to solve it for us.

Finally he arrived back at HMS Pembroke 18th August 1946, and stayed there until he was demobbed on 2nd January 1947, he arrived home in a navy blue pin striped suit, with a double breasted jacket and eleven inch bottoms to his trousers, but apparently he carried his trilby hat, all generously provided by the Navy.

I have read some comments on line from ex-sailors who were sent to HMS Mayina during 1945, Len never mentioned Mayina, and I am not surprised. Again this was an on shore base; it was in the jungle a few miles from Colombo in Ceylon, now Sri-Lanca, (These are their words not mine), ‘In 1945 there were thousands of sailors in this hutted camp, the Allies were assembling the biggest fleet ever assembled ready for the attack on Japan, the conditions there were horrendous, the food was cooked by the natives, they could only cook what they were used to eating themselves, which led to epidemics of dysentery and diearea, there was no water in the camp, it was brought in daily in tankers, there were snakes, scorpions, and all types of biting insects, they were not allowed out of doors during the day because the temperatures reached 120 degrees in the shade. The fleet were assembled the men were ready, when fortunately just before the fleet were sent to attack the Japanese mainland, the atomic bomb was dropped to put an end to it all’.

The hardest period of Len’s time in the Navy I have no doubt, was when he was on the Russian Convoys, the men on these convoys were in danger from the moment they left Loch Ewe. Below is the full list of the convoys he sailed on taken from his official service record:- Convoy JW 55b. Convoy RA 58b. Convoy JW 58. Convoy RA58. Convoy RA 59a. Convoy JW 65. Convoy RA 65. Convoy JW 66. Convoy RA 66. They left Murmansk for the UK on the 29th April 1945. This is the convoy when HMS Goodall set on fire and was sunk by a German submarine. The skill of the Captain in getting HMS Honeysuckle alongside the stricken ship enabled them to pick up survivors.

There is quite a gap between some of the convoys. During one of these periods the Honeysuckle was in port for extensive repairs following severe damage due to enemy attacks from submarines and from enemy aircraft.

It took 70 years of hard work by a group of veterans to eventually persuade the British Government to agree to recognise the bravery of these men with their Arctic Convoy Medal. Sadly it was too late for Len who died in 2001 aged 77, but his wife Betty is patiently waiting to receive the medal on Len’s behalf. (Written 2013)