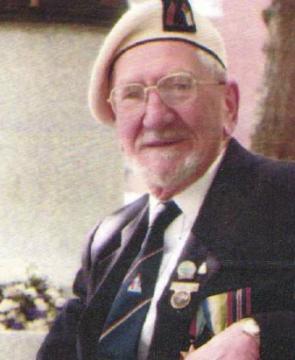 I first went to sea in June 1941 aged 15 years. I joined the SS Marita, a Norwegian ship of around 2,000 tons, as a mess boy. My starter pay was £30 per month, big money as I had been earning 2-3 shillings in my first job. We sailed at 10 o’clock in the morning, an hour earlier than I had been told. My mother and brothers had come to see me off and it was a big disappointment for them and me. We sailed for Canada with escorts for the first two days only.

On the return journey we set off from Bathurst, New Brunswick in convoy. There were U-Boat attacks and I remember being on the boat deck with the cook, who was looking after me. The convoy scattered and we were on our own for a couple of days doing around six knots. We met up with a few more ships and made it to Loch Ewe. We were then sent through the English Channel to London. Two army gunners were put on board with a machine gun for our protection and to help with our only Norwegian gunner.

From London we went to Newcastle where I paid off and joined another Norwegian ship, the SS Skienfjord. The next trip took us to St Johns, New Brunswick and my brother Ernie joined us on the ship. I remember coming back to the ship in the evening when the dock area was lit up and there were 500lb bombs waiting to be loaded on our ship. We saw some action on the way home but we survived. My next ship was another Norwegian ship, the MV Nortind, an oil tanker. I was a deck boy and really enjoyed it, as a couple more Bristol boys joined us including my brother Ernie on a trip to Beaumont, Texas to load 10,000 tons of gasoline. There was no escort on the American coast but we made it back to Port Sunlight. (sic).

On the next trip in the Gulf of Mexico I was at the wheel on the 4 to 8 watch when we were torpedoed on the port side. Although it was right under the bridge I was thrown across the wheelhouse but cannot remember hearing any explosion. An S.O.S. was sent out and an American navy plane came out. Later some officers arrived and we made our way to New Orleans. We spent a few days there while the damaged plates were repaired and then we were sent to Mobile, Alabama escorted by a small launch. What good could that do? We spent 2-3 months being repaired, living on board and working 24 hours a day. I got used to the noise. We made our way back to Port Arthur, loaded again and then, under escort, made our way to New York. We paid off in Swansea. Other boys took our places and all were lost on the next trip. What a terrible waste of life!

My next trip was to West Africa on the SS Tanafjord, where we had engine trouble. It was a bitter cold trip getting there out in the North Atlantic and steering on the open bridge with no protection. I remember wearing my rubber survival suit at the wheel. We were in Takoradi for a couple of months waiting for engine parts. I contracted malaria and was in hospital for 16 days and then back to work. She was a great ship to work on with good officers and crew. I was aboard her for about 4 months. I next joined the MV Herbrand, another tanker, which had been converted into an escort supply tanker in Hoboken. Another great ship; how the crews of the corvettes and destroyers managed in the severe weather is a marvel to me and I never envied them. I did three trips on the Herbrand and she was my last Norwegian ship.

I then joined the SS Fort McMurray in Barry and we went to Manchester to pick up our cargo for Russia. I was disgusted with the conditions on this my first British ship. I was getting less than half the pay I had been receiving and there were no pillow cases, bed sheets or extra blankets. In addition the food was rationed.

Everybody knew where we were going because everything was marked in Russian. We went to Loch Ewe and then sailed for Russia on February 14th 1944. The convoy was sighted by a Condor, but luckily for us the weather closed in. We did lose one escort from an attack. The night time was the worst; keeping our correct position and knowing that U-Boats could be inside the convoy. We arrived at Murmansk and anchored in the Kola Inlet. From there we and the Empire Carpenter were sent through the White Sea. We were towed by an icebreaker and there was a man with an axe ready at all times to cut the tow free in case of an attack by aircraft. The Empire Carpenter followed in our wake. We passed Archangel and went onto a little port called Bakaritsa. The icebreaker cleared the ice by the quayside and we were frozen in again soon after.

It is hard to believe but a notice was put up in our mess rooms informing us that if we were caught associating with any woman or bartering we could get 5 years in the salt mines. It made us very wary, that’s all I can say! We attended some dances in the local hall where they read out the news to the Russians.

The things I remember are the soldiers marching up and down guarding the cargo and the huge amount of snow. The cargo was being unloaded by political prisoners, mostly women, poor devils. The Empire Carpenter was left there for the Russians and we brought some of her crew home as passengers. We returned to Murmansk and then back home in convoy. I do not really remember any action on the return trip. Paid off and then back to sea within two weeks.

I joined the SS Clune Park and went to West Africa where we loaded sapele logs and was home again in three weeks. After that I joined the SS Atachee, a very old tanker and we berthed forward in the fo’c’s’le. Winter on the North Atlantic again and a very slow ship. We lost our position in the convoy a couple of times and, as we neared the coast, a ship astern of us was hit. We did not stop but kept going and there were depth charges in the convoy very close to us. At night we thought we had been hit and my mate (sadly now gone) and I grabbed our clothes and rushed out onto the deck. It was snowing and I was glad to get my trousers on, but it ended up another trip made safely.

My next ship was the SS Sambre and I joined her in Montreal where she was picking up grain. The war in Europe had ended and I was on my way home and by the time we got there the celebrations had ended but there was still a war time blackout aboard. She was a good ship with sheets and pillow cases and good food.

Next I joined the SS Fort La Cloche, a Liberty ship. It was supposed to be the last voyage to Canada but we ended up taking a lot of army and air force stuff to the Far East and I was in Bombay when the War finished out there. I carried on at sea until 1949 when I failed a colour blind test. My biggest regret was that I could have gone straight back to sea but I was not told this.